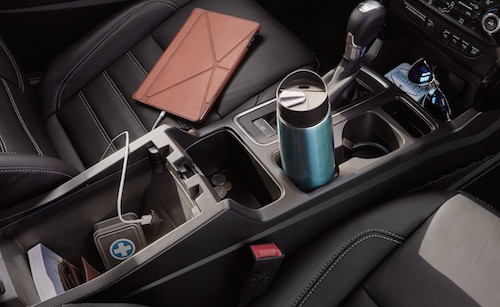 “That whole center console area is what we call ‘Manhattan real estate,’ because it’s valuable,” says Zulf Ali, a senior interior designer at Ford. “It isn’t a lot of space to work with, but as a designer, those constraints are exciting. It’s a challenge that forces you to be more creative — to ask yourself, ‘OK, how can we get clever with this?’”

The 2017 Ford Escape features a smaller electronic parking brake button, instead of a traditional handled brake, which allowed designers to move the gear shifter rearward to open up more space in the vehicle and provide a more comfortable position for a driver’s right arm.

“We found ways to utilize as much of the space as we possibly could,” says Ali. “Adding the electronic parking brake really opened up a whole new world of possibilities.”

In front of and behind the gear shifter, designers created two storage bins to place a wallet, keys, sunglasses, and other items.

The main center console bin, which also contains a USB port, is nearly 50 percent larger than in the current Escape.