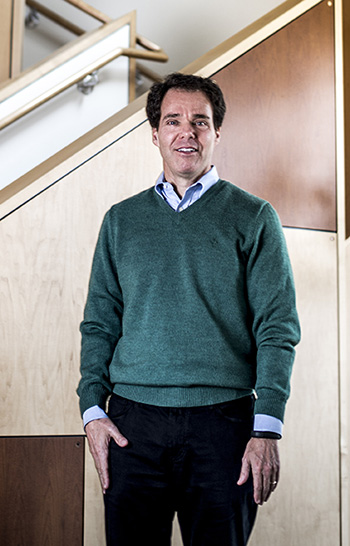 WHY HE’S A CHAMPION OF THE NEW ECONOMY:
Operating the largest venture capital firm headquartered in Michigan, Charles Rothstein helps oversee more than 70 portfolio companies in the United States as well as the United Kingdom. The firm’s goal is to invest in and grow businesses that offer a product or service that can’t be usurped by technology or quick upgrades. “Mophie is a company that started in a barn in Kalamazoo, and they came to us four years ago when they were doing $12 million (in annual revenue),” Rothstein says. Mophie designs and manufactures electronic accessories for smartphones, tablets, and various electronic devices including the iPhone, iPad, and iPod Touch. Making an undisclosed investment, Beringea helped Mophie expand its Juice Pack line of external power cases, one of which comes equipped with a magnetic strip reader that allows users to process credit cards. “Now Mophie is doing $450 million in (annual) revenue,” Rothstein says. “They needed investment capital and guidance. We wish every deal were like that. But it shows you that Detroit and the Midwest have a lot to offer.”

What have you been working on lately?
We provide growth capital so that management teams (can) continue to execute their business plans. But sometimes things don’t work out, so you have to be patient. A few years back, we took a look at an investment proposal for a small music college in the U.K. They help talented students looking to pursue a career in music, and there was no college alternative. The first year, they had 180 students; 11 years later, they had 2,000 full-time students among six different locations. It’s great, because the students get a college degree from an accredited university. Two years ago they were looking to grow across the U.K. and the U.S., but they wound up taking capital from someone else, so things were quiet for a couple of years. But I kept at it because I liked the business model.

What happened next?
Last summer, I called our London office and, as it turns out, things changed and the noncompete (agreement) expired. So we got a hold of them, and they were asking why we were calling. I said, I have a friend that is rejuvenating Detroit, and would they be interested in taking a look at Detroit to open a music college? So when they arrived (last September), you wouldn’t believe the reception from Dan Gilbert (and his Quicken Loans family of companies). He and his team showed them all the different areas that were under development. I can’t tell you what it’s like to have Dan Gilbert as an ambassador for Detroit. They weren’t looking for investment from Dan, but he saw the potential (to help fill space in the central business district), and they rolled out the red carpet.

What was the college’s impression of Detroit?
They had a skeptical view of Detroit. They had seen some of the shocking movies and TV shows about the city, many of which are sensationalized. But when they arrived, they saw a beautiful city with incredible architecture. They caught the edginess and the buzz, and they met with people who are very passionate about the city’s rejuvenation. And their response was this was where they wanted to be (before expanding to other parts of the country). There was a brief period where we looked at the American Idol concept of auditions, but that didn’t fit their model. The Detroit Institute of Music Education (DIME) provides the proper education to pursue a career in music. The industry has really changed with more digital music, and iTunes, and everything has shifted around. The students will receive traditional music education, but also entrepreneurial training. I’m very fired up about it.

What makes for a solid investment opportunity?
We look for an entrepreneurial heritage, low-cost operations, and access to technology and other resources — basically the people we have in Detroit and Michigan. We never follow the herd. One of the realities (of venture capital) is that it takes a little while for the fruit to bear. We started in 1988, first as an M&A boutique. Three or four years into the business, we evolved into investing and fund management — but we continued to have our M&A advisory business. The second chapter was the investments you see today, such as with DIME. We work closely with the state of Michigan and their investments with promising companies and people. But when you look at DIME, that all came about because we have an office in the U.K. We will continue to grow into Europe with our portfolio companies, as well as in Michigan and the Midwest.