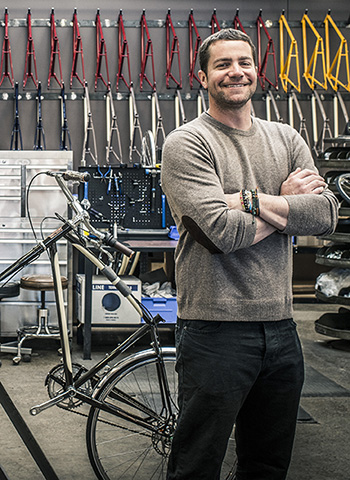 WHY HE’S A CHAMPION OF THE NEW ECONOMY:
Three years ago, Shinola was a startup armed with lofty aspirations of reinvigorating America’s manufacturing heritage by sourcing and assembling as many domestic components as possible in an ever-evolving series of limited edition, luxury watches. Starting assembly in spring 2013, the company produced 50,000 watches in just nine months and now is on track to craft 150,000 watches this year. What’s more, it recently expanded throughout the entire 60,000 square feet of space it leases at the College for Creative Studies’ A. Alfred Taubman Center for Design Education near Detroit’s Fisher Building. “There’s no one person that stands out at Shinola, rather we’re a movement of people dedicated to rekindling American crafted goods,” says Jacques Panis, president of Shinola. “We have more than 230 employees, and we’re going to be adding more this year and well into the future.” In addition to watches, the company assembles handcrafted bicycles, leather goods, linen journals, and furnishings.

Why is the company named after a line of shoe polish?
There’s such a wonderful history and heritage to the name Shinola. It’s a very iconic brand in the United States. The shoe polish was carried by many of the GIs during World War II. It’s a brand that resonates, it has humor to it, and it makes people smile. Most people remember their grandparents saying, “You don’t know sh – t from Shinola.”  When we came upon that brand (the company got its start in New York as Shinola-Bixby Corp. in 1907 before folding in 1977), it made a lot of sense to bring it back and re-craft it so that people could engage with it and have fun with it. Fortunately, we assembled a team of people around the brand that could help shape what it is today. We started with our limited edition Runwell collection of 2,500 pieces that we launched with an ad campaign with the tagline, “The long tradition of Detroit watchmaking has just begun.” We sold all of the pieces in eight days.

Given high volume watch production moved overseas years ago, how did you find the talent and expertise in Detroit?
We did it by partnering with Ronda, which helped us bring watch manufacturing and movement manufacturing back to the U.S. They are an almost 70-year-old movement manufacturer from Switzerland, and they helped us train our people and set up our operations to the Swiss criteria of assembling the highest quality watches. In addition to that, we’ve been fortunate to have great leaders in place throughout the entire organization. If you look at Will Holly, he’s now one of our team leaders in the assembly process, and before that he was a security guard in the building. When you hire people, you look for leadership skills, in addition to great talent. We found all of that and more right here in Detroit.

What’s driving your rapid growth?
It’s actually going to be even more exponential due to the new leather factory we opened in April that served to fill all of our space. We’re bringing more jobs with skill sets that have been very scarce in this country for many years. This year we added a second movement assembly line, so we’re on track to produce 150,000 watches, and we’re selling them all over the world. And they all proudly say Detroit (on the face, and “Built in Detroit” on the back). The reason we started the leather factory was the need for more straps. We work with a wonderful company called Hadley-Roma (in Largo, Fla.), and now their capacity is practically full. So we opened our own facility and continue to work with them, and we’ll have 40 to 60 people (working in the leather factory) by the end of the year.

What other growth plans do you have?
When you look around Detroit, you see the Big Three assembly lines and the suppliers located nearby, and that’s what we would like to see in the neighborhood around us. We’ve started to have those conversations with companies around Detroit, and we hope to make 100 percent of our components in Detroit one day, so that means the case, the buckle, the dial, the hands, the crown, the crystal — all of it coming out of the Midtown neighborhood or the city of Detroit.

How’s the retail expansion going?
We’re adding a third flagship store in Minneapolis this summer (the Detroit and New York flagship stores opened last year), and we’re looking to add stores this year in Chicago and Washington, D.C., as well as London, Berlin, and Amsterdam. We opened a very successful popup store in Singapore. Our plan is to continue to open stores across the U.S. Over the next five years, we plan to open eight stores per year.

How did the brand garner such resonance so quickly?
It goes to the community and how supportive the people are across Detroit and Michigan. If you look at all of the partnerships we forged with Detroit businesses like Paxahau Productions, the Detroit Grand Prix, Ford Motor Co., and Lovio George, to name a few, as well as Henry Ford Museum, Midtown Detroit, and CCS, it has just been incredible. We also feel people really responded to the high level of quality and craftsmanship we put into everything we do. We just launched a lifetime guarantee, and you can only do that when you offer quality. Our people are the real champions. They work hard every day and put their heart and soul into every timepiece we assemble. It has nothing to do with me at the end of the day.

What new products are you contemplating?
We’re exploring a lot of different ideas, everything from shoes and apparel to furniture and home goods. One of the most important things for us is to remain focused on building a profitable and sustainable business. We’re so excited to play a small part in helping to move Detroit forward in a positive direction. To do that, we have to ensure that every one of our products that rolls off the line can stand up to a lifetime guarantee. That means we inspect every single component before it goes on the assembly line, we inspect them as they are assembled, and they all go through a final, stringent inspection before they leave our factory. That’s what Detroit is all about.