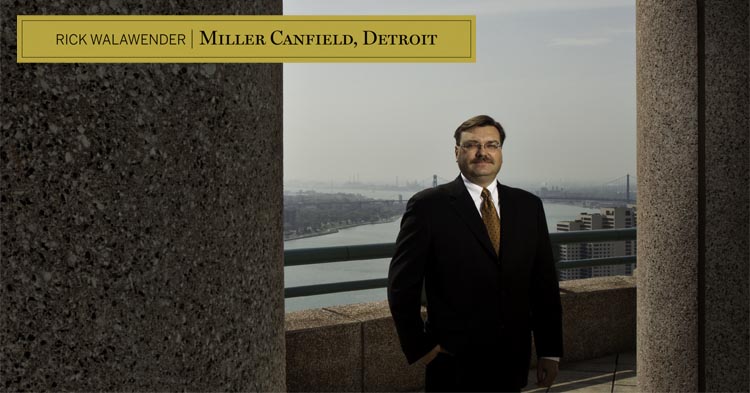 As a U-M undergrad, Rick Walawender became fascinated with the rise of solidarity in Poland and enrolled at Jagiellonian University in Kraków in 1981 (as a foreign exchange student) for two semesters. The experience proved to be fruitful. When Lech Walesa’s Solidarity Party gained control of the Polish government in 1989, party representatives contacted Walawender, then a third-year associate at Miller Canfield, to create and find investors for the Solidarity Bank — one of the first private commercial institutions in the former communist-controlled country.

“The work in Poland opened the door for our international practice as we represented U.S. firms overseas while developing an expertise in international M&A, financing, joint ventures, and greenfield operations,” says Walawender, who heads Miller Canfield’s corporate, international, and automotive practices. Michigan’s largest law firm now has foreign offices in Mexico and China, two in Canada, and three in Poland.

As it stands today, more than half of Miller Canfield’s corporate practice is international, including representation of companies going inbound to and outbound from India, China, Mexico, Brazil, and Eastern Europe. Walawender says Russia will be included in the near future, and the firm is studying expansions in six other countries; the hope is that they will be operational in the next five years.

After graduating from U-M Law School in 1988, Nicholas Stasevich landed a research fellowship at the Ministry of Foreign Relations in Warsaw before joining Butzel Long. The overseas experience helped create a measure of reserve as Stasevich cautioned a Fortune 500 company to avoid investing in the former Yugoslavia because of a possible civil war in the early 1990s.

With his early international work serving as a foundation, Stasevich was the harbinger of Butzel Long’s overseas practice.

“We probably had one international law matter when I joined the firm in 1988, and today approximately 25 percent of our revenue stems from inbound and outbound international work,” says Stasevich, who has assisted clients in 60 countries on M&A, antitrust, joint ventures, and employment matters. “I believe that within the next decade, over half of our work will be international.”

Increasingly, law firms are strategically recruiting or utilizing their own attorneys to enter new markets. Such lawyers have the cultural background and relationships to cultivate and obtain work from domestic- and foreign-based companies.

Mahesh Nayak, a native of India raised in metro Detroit, directs Clark Hill’s India Practices Group. “With the shift in the world economy, we saw the opportunity to work with our automotive and IT clients that were seeking to go to India, while recognizing that Indian companies were also planning to land in the U.S.,” says Nayak, who was recently named president of the Michigan South Asian Bar Association.

Nayak says India and other Asian Pacific countries offer a deep well of business opportunities. “India is the most populous capitalistic democracy in the world, it has a flourishing economy, English is the universal language of business, and all of that presents a tremendous opportunity for inbound and outbound business,” he says.