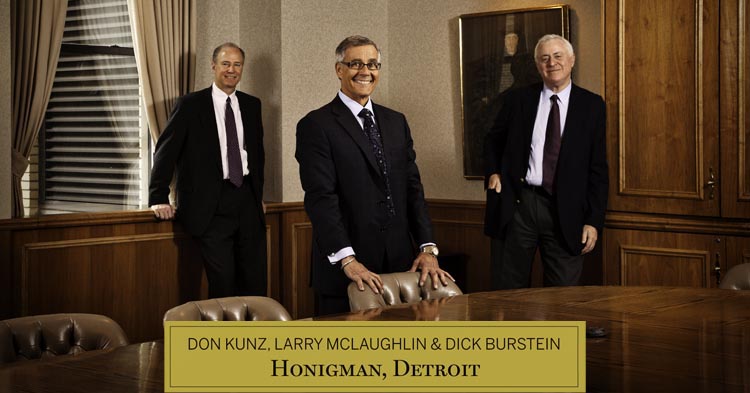 Attorney Larry McLaughlin gathered his bags at Seoul’s Incheon International Airport and wondered about the reception he would receive. As chair of Honigman’s real estate department in Detroit, McLaughlin was in South Korea to negotiate a large retail project for luxury mall developer Taubman Centers Inc. of Bloomfield Hills.

“A lot of the early negotiations turned on the prevailing language of the contract — whether it would be in English or Korean. It was critically important that if a dispute arose, we [could] settle it using English law,” says McLaughlin, who had traveled to South Korea on three separate occasions to seal the deal on behalf of Taubman.

Compounding the negotiations were the vast differences in law between the two countries. In some cases, legal terms did not translate well, if at all. What’s more, a Korean-based department store involved in the project only wanted to use a standard six-page lease document with boilerplate language.

“You want to be very patient when expanding on foreign soil, because you may be giving up certain rights that can come back to haunt your client,” McLaughlin says. After months of negotiations, the groundwork for a financial center complemented by housing and retail developments was accomplished. Once the Korean team finalizes the overall development, Taubman will complete its end of the agreement, he says.

McLaughlin also is working in Macao, a region in China, on behalf of Taubman, while partner Richard Burstein is working on another Taubman project in Puerto Rico. As the chair of Honigman’s Corporate and Securities Department, Donald Kunz has witnessed firsthand the steady growth of inbound and outbound foreign business. “Over the years our international practice has grown tremendously, because it mirrors the activity of our clients,” says Kunz. “Twenty years ago there was a sense that the U.S. was the market and, if you did well there, that’s all you needed to do.”

While cross-border negotiations were rare 20 years ago, improved transportation and technology — and the opening of foreign markets — are providing new revenue streams for metro Detroit’s legal industry.

“Our international practice has been increasing every year for two reasons,” says Laurence Deitch, a partner at Bodman who chairs the firm’s automotive industry team. “One, the biggest auto suppliers based in Michigan have a significant portion of their growth overseas; and two, strong companies in India, China, Japan, and Europe now have a presence in the United States.”

Vikramaditya Khanna, a corporate law professor at the University of Michigan Law School in Ann Arbor, says regional law firms by necessity had to become more international in scope with the U.S. gaining access to markets in China, India, Eastern Europe, Russia, and Latin America, as well as the implementation of GATT (General Agreement on Tariffs and Trade) and NAFTA (North American Free Trade Agreement).

“There was market pressure for the Detroit firms to service their clients internationally,” Khanna says. “Because an increasingly large number of deals had an international component, (they had to) become familiar with global legal issues and collaborate with foreign law firms, or else their clients might go elsewhere.”