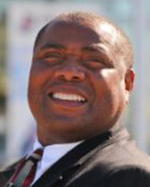 Morris has nearly 10 years of  experience with U-M Athletics in marketing, sales, and development. Previously, he had his own consulting business.

Morris, of Ypsilanti Township, set numerous U-M career and season records for rushing and offensive production including career most yards rushing. He was named First-team All-Big Ten running back and Fiesta Bowl Co-MVP in 1987 and named the Hall of Fame Most Valuable Player in 1988. After leaving the Wolverines, Morris went on to play for the Washington Redskins, where he still holds the record for single-game rushes.

This year’s UAW-GM Spirit of Detroit Hydrofest featuring the APBA Gold Cup will run August 26 thru 28. For ticket and event information, call 313-329-8047 or go to detroitboatraces.com.