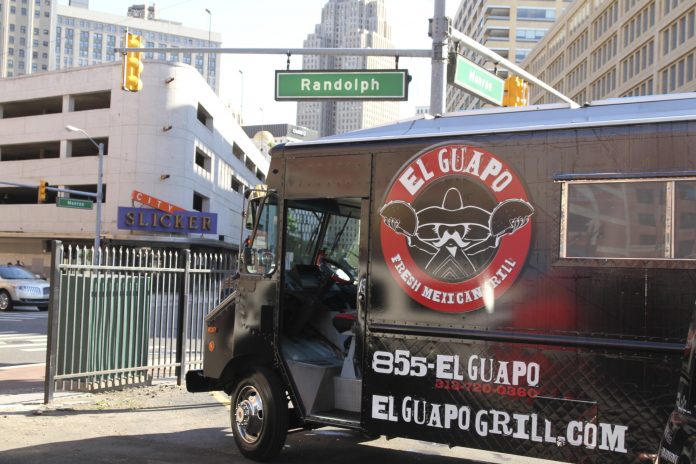 What’s the latest news regarding Detroit’s allowance of street food? One down, many more to go. El Guapo Grill, a Mexican-inspired mobile food establishment, is not the first to try, but it is the first food truck to succeed in acquiring a license to sell cuisine on wheels. Perseverance was the key; it took owners Anthony Curis and Douglas Runyon some 60 trips to City Hall to work out a solution. “The city was great. They were very willing to work with us because they really want Detroit to be more progressive,” Curis says.

Chris Gulock, a Detroit city planner, is one of the workers drafting a new proposal for the revision of the laws on mobile food service in Detroit. Gulock confirms that as the law has been interpreted, “They’re basically not allowed anywhere.” Zoning laws restrict vendors from parking within 500 feet of a brick and mortar establishment, and a 200-foot radius from other street vendors of any kind. The current law also keeps vendors away from parking lots and gas stations. Gulock says, “This makes it virtually impossible” for potential vendors to legally set up shop. Curis and Runyon worked with the city to obtain a six-month permit that allows them to have their truck on the corner of Monroe and Randolph, near Greektown, for an allotted amount of hours per day.

El Guapo Grill’s owners hope that Detroit’s zoning laws will change soon so they can continue doing business after their temporary permit expires. Law changes would also mean an influx of other food trucks. There are a few trucks that have illegally sold food, and since the zoning laws are complicated and unclear at times, it has been an enforcement issue for authorities. But the owners of El Guapo Grill wanted to do it right, and hopefully pave the way for others to follow suit. Curis says, “(Part of the reason it took so many trips to the city is because) we were working on a checklist for other trucks that want to get their permit.” The checklist includes the steps that lead up to becoming a legal mobile food service establishment, a segue to the new proposal.

Other cities like San Francisco, Austin, Texas, and Washington, D.C. that have embraced food trucks have seen a positive impact. The services have been credited with adding atmosphere to city sidewalks and neighborhoods, drawing pedestrians onto the streets, and attracting tourists. According to bloggers, atmosphere and tourists are exactly what Detroit needs in order to grow. Curis agrees. “My partner and I researched (the industry) and traveled to other cities. Street food creates a sort of culture that adds to a downtown area. Detroit needs a more vibrant and walkable downtown,” he says.

Jim Bieri, president of Stokas Bieri Real Estate in Detroit, says, “A lot of times sports fans or concert goers from the suburbs just get in and get out, so food trucks could be an addition that could get people out of their cars.” So why are the laws not bending just yet? Competition. Established restaurants in the area have a say in the issue, and in these times, new competition is not always welcome.

Bob Rossbach, a spokesman for Detroit Economic Growth Corp., a quasi-public development agency, explains, “If it’s something that will bring new business into Detroit, it’s certainly something worth looking at. … But you don’t want to create new business for one group at the expense of another group.”

Jim Bieri agrees, “It might not be fair to brick and mortar establishments who pay property taxes year-round,” but he adds, “I’ve always thought that competition is good because it makes people better Food trucks are something fun, and of course, anything that gets people on the street is fantastic.”

While downtown Detroit is processing changes to the current laws, the surrounding metropolitan area has a jump-start on embracing the mobile food trend. Ann Arbor recently opened Mark’s Carts, which is essentially a food court on wheels. Owner Mark Hodesh bought an empty space near downtown Ann Arbor where vendors operate seven carts that offer a variety of cuisine. “It’s about 50 percent food and 50 percent social,” Hodesh says. “It’s like a community picnic.” The trucks serve foods varying from Mexican to vegan, and have enjoyed a warm reception from Ann Arbor residents.

So will Detroit see the same reception for food trucks? The owners of El Guapo Grill can attest first hand. Curis says, “We didn’t know what to expect after all the build-up with the city. But it’s been terrific. We’ve sold out every day. We’re thrilled.”

In the long run, Detroit sports fans, office workers, and event attendees from outside the city could benefit from quick and affordable options that the trucks offer. “Food trucks could create a bigger marketplace since there isn’t an overwhelming number of restaurants available downtown, especially ones that can cater to large groups coming out of a stadium or theatre,” Bieri says.

In its opening week, lines at El Guapo Grill extended past 50 people each day. When asked if they would ever consider going brick and mortar, Curis laughs and says, “That might be a natural progression, but for now, we are taking it day by day.”