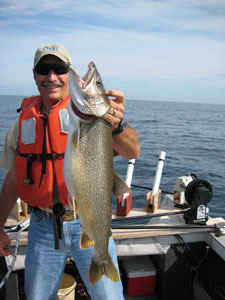 The Michigan Department of Natural Resources is forecasting a good season for lake trout fishing in the Great Lakes of Superior, Michigan, and Huron after its 2015 assessment and research of and the trout populations and status toward being self-sustaining.

“The data indicate that Lake Superior continues to be a self-sustaining lake trout fishery and the other Great Lakes are continuing on that track,” says Gary Whelan, DNR fisheries research program manager. “The data also show anglers should expect continued good fishing for lake trout in our Great Lakes waters in the upcoming season.”

The results of the 2015 surveys and outlook for 2016 for each lake are as follows:

Numbers of deposited lake trout eggs remain low but were higher in 2015 compared to the previous two years and there is evidence of natural recruitment in Lake Michigan. Because of reductions in Chinook salmon populations and stable to expanding lake trout populations, the DNR expects to see higher recreational catch rates of lake trout that should include larger fish in 2016.

Lake Huron: The 2015 surveys of lake trout populations showed a continued trend to becoming self-sustaining. From the eastern Upper Peninsula to the Thumb coast, the 2015 surveys documented that wild lake trout now comprise 69 percent of the fish under 21 inches and most of the fish under 29 inches. Survey catch rates of wild lake trout have increased dramatically since 2004. Stocked lake trout also were collected and ranged from 3 to 22 years old. Lake trout survey catches also showed a continued rapid expansion of age composition, which indicates a low annual mortality for adult lake trout.

Sea lamprey wounding rates decreased 58 percent from 2014 to only five per 100 fish in 2015, the lowest value since 1970. Survival of stocked lake trout showed a continued decline, reduced by an estimated 81 percent since 2009, and has shown no sign of improvement since the 2003 stocking that coincided with alewife collapse in Lake Huron. The DNR expects to see stable numbers of lake trout in 2016 with a continued decline in the survival of stocked fish and increasing numbers of wild fish in Lake Huron.

For more information on lake trout in Michigan, visit the Michigan Fish & How To Catch Them web page.