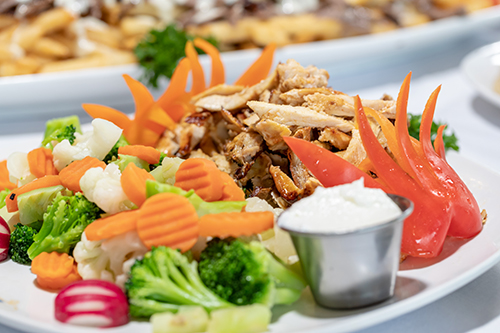 On Thursday, Olympia Development of Michigan announced that Sahara Restaurant and Grill will open its first location in Detroit next year. The 4,500-square-foot space will be located at the Little Caesars world headquarters campus expansion on Columbia Street, immediately south of the Fox Theatre.

“We’re bringing the taste and authenticity of Chaldean and Mediterranean food into Detroit. Sahara has been around for 37 years and we’re excited about being able to do that,” says Zeana Attisha, co-owner of Sahara Restaurant & Grill in Oak Park, Sahara Restaurant & Banquet Center in Sterling Heights, and Sahara Market & Bakery in Warren.

The restaurant joins Frita Batidos, a Cuban-inspired restaurant offering burgers, milkshakes, alcoholic beverages, and game-day specials as well as The M Den and The Victors Collection by The M Den. The entities will open next year.

Sahara’s menu will feature locally sourced food and ingredients from area farmers and food suppliers. The offerings will feature “a little Motor City Flair,” along with Mediterranean and Middle Eastern favorites like grape leaves, falafel, fattoush, tabbouleh, and varieties of meat shawarma, which is cooked on a rotating vertical rotisserie cone and often stuffed inside pita sandwiches.

Patrons can also expect build-your-own combo plates and unique fusions, like “Sahara fries,” a popular customer-made creation combining French-fries, a half-order of Shawarma, and a drizzle of the restaurant’s house-made ranch sauce.

Other items will include ready-to-eat baked goods, beer on tap and other alcoholic beverages, including the Chaldean favorite, Arak. The distilled spirit features the anise seed, which has a slight licorice flavor. Gluten-free, vegetarian, and vegan options will also be available.

Attisha’s husband and Sahara co-owner, Saad Attisha, founded the restaurant nearly 40 years ago. The eatery first served the metro Detroit area on a small corner in downtown Ferndale before moving to Oak Park.

Sahara will bring in designers, painters, and architects to create a unique décor for the Detroit location. During the warm weather months, the restaurant will also offer outdoor dining along the European-style promenade on Columbia Street.

“We are really excited to have Sahara coming to The District Detroit where many new diners will be able to enjoy their unique Mediterranean and Middle Eastern dishes and decor,” says Travis Arbogast, vice president of development at Olympia Development. “This unique establishment signifies the diversity we will continue to attract to this exciting, new retail and dining destination.”

Located west of Woodward Avenue, the new retail options on Columbia Street will serve patrons before and after events at the historic Fox Theatre, Comerica Park, and other nearby sports and entertainment venues.

The new storefronts will total nearly 40,000 square feet of new shops and restaurants along a block-long, pedestrian-friendly strip that will vaunt cobblestone paving and festoon lighting.