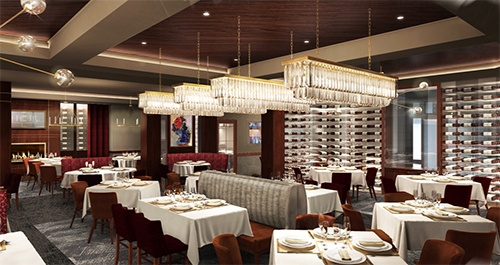 Hyde Park Prime Steakhouse today announced it will open its second location in the region at 17107 Haggerty Road at the Northville Village Center shopping complex in Northville Township. The eatery will open on Nov. 9.

Hyde Park offers aged prime steaks, some of which are named after local area sports celebrities such as the Steak Sanders and the Steak Daly.  Hyde Park also offers prime dry-aged and Wagyu “Kobe-style” steaks along with a daily blackboard menu of fresh fish and seafood representing all coasts.

The 7,000 square foot freestanding restaurant features 200-seats as well as three banquet rooms capable of hosting up to 120 guests. The bar will be open daily from 4 p.m. The company also operates a restaurant in downtown Birmingham.

“We are excited to be opening our second location in Michigan and show Northville our passion for exceptional food and service, and look forward to making friends in our new surroundings,” says Joe Saccone, president of Hyde Park Restaurant Group.

The Northville Township restaurant will open Monday through Friday at 5 p.m. and Saturday and Sunday at 4:30 p.m.  Dinner entrees will be priced from $13 to $72 with bar menu items starting at $11.

Hyde Park Northville will also feature a Happy Hour from Monday through Friday from 4 p.m. to 6:30 p.m. Complimentary valet service will be provided.