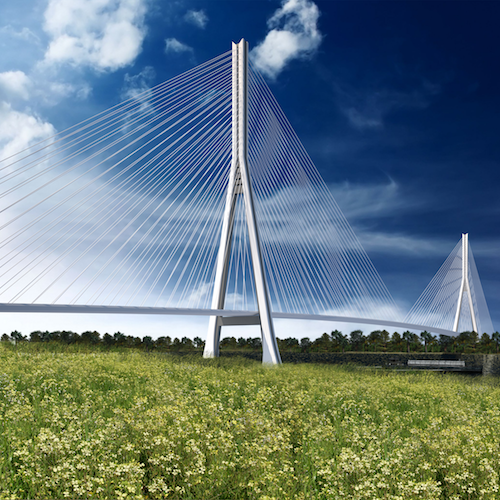 “Progress on this critical infrastructure is accelerating, and that progress will continue,” says Gov. Rick Snyder. “The issuance of the (request for proposals), which is the result of thousands of hours of work and consultation by Canada, Michigan, and many other project stakeholders is an all-important milestone that we have achieved together.”

The request for proposals sets out the conditions and specifications required to deliver the Gordie Howe International Bridge project. The proponents will prepare and submit their binding technical and financial proposals, including a fixed price and schedule.

A team comprised of WDBA officials, partner organizations, and experts will evaluate each proposal, and a preferred proponent will be identified.

Government officials say the bridge, which is named after famed Detroit hockey player Gordie Howe, will reduce commercial traffic and create new economic opportunities for residents of Windsor, Detroit, and neighboring communities. Improving transportation across the border will also enhance trade and create thousands of jobs across southwestern Ontario and southeastern Michigan by encouraging growth in sectors such as automobile manufacturing, officials say.

The bridge will have Canadian and U.S. ports of entry as well as approach bridges, customs plazas, a tolling station on the Canadian side of the border, and a Michigan interchange connecting Interstate 75 to the U.S. port of entry. Preparatory work is already underway at locations on both sides of the border.

The WDBA will host meetings in Windsor, Ontario, and Detroit to provide opportunities for the region’s business community and the proponents to network and engage in introductory discussions on sourcing and vendor needs. The first meeting will be held on Nov. 30, from 4 p.m. to 8p.m., at St. Clair Centre for the Arts in Windsor.

According to officials with the WBDA, Canada and the U.S. have the largest bilateral trading relationship in the world, with two-way trade in goods and services of nearly $670 million last year. Some $1.9 billion worth of goods and services cross the Canada-U.S. border every day.

The WDBA is a nonprofit Canadian Crown corporation created to manage the procurement process for the design, construction, financing, operation, and maintenance of the new Gordie Howe International Bridge.

The $2.1-billion bridge is projected to open in 2021, though it could be delayed based on the completion of acquiring around 900 properties on both sides of the border.