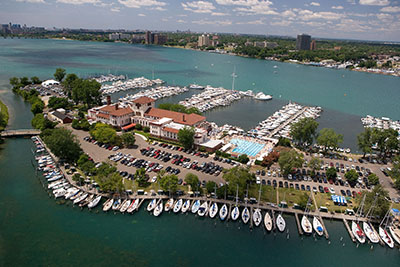 Mark Lifter, president of the Detroit Yacht Club Foundation, says restoration work began about two years ago after discovering water was coming through the roof, walls, windows, doors, and the masonry.

“We decided to create a program called Seal the Envelope — which really meant the envelope of the building — so that we could put a stop to this water intrusion,” Lifter says. “Essentially what we’ve been doing is raising funds and executing projects that began with roof issues.”

The foundation has spent $500,000 repairing cracked tiles on the roof, the masonry, and the stucco on the west and south end of the building (about 75 percent of the structure’s stucco) “in a historically compatible fashion with long-lasting materials,” he says.

Lifter says the foundation plans to spend up to $300,000 continuing stucco repairs this year on the south side of the building, doing masonry repairs, painting, and restoring some of the building’s historical features.

He says the exterior renovations are scheduled to be completed in the next two to three years, and at that point, the foundation will began interior restoration work.

To raise funds for the renovations, the foundation will host Restoring the Grandeur: City Lights Gala on May 20 at the club. Lifter says the event will include a strolling dinner, jazz combo, and a silent and live auction with about 20 items each. Tickets range from $125 to $400 and are available here.

The Detroit Yacht Club Clubhouse was designed by the George D. Mason Co. and dedicated in 1923. The clubhouse, listed on the National Register of Historic Places, is in the Mediterranean Revival style, with a red tile roof, asymmetrical massing, and an informal design.

Detroit Yacht Club Commodore Jim Gierlach says since last year, he’s noticed an increase in the number of boaters in the club as well as a higher demand for boat slips.

“Over the past several months, we have signed up many new boaters,” Gierlach says. “Many new members have been coming to the club and seeking out boat wells at the Detroit Yacht Club. Additionally, what we’ve been seeing is a higher demand for larger boat slips for people that are bringing in larger boats.”