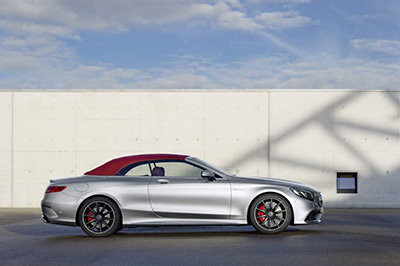 Mercedes-Benz today introduced the new E-Class, along with new models of the Mercedes SLC, the SLC 43, and a special edition convertible.

“There are 10 generations of E-Class vehicles, with more than 30 million produced,” said Dieter Zetsche, chairman of Daimler AG and head of Mercedes-Benz. “(Consumers can) chose from 64 different colors to illuminate the interior of the car.”

Zetsche said compared with previous generations, the new E-Class has an extended wheelbase length, shorter overhangs, and larger wheels. He said the vehicle interior features touch-sensitive control buttons on the steering wheel, like a smartphone interface. The doors are covered with leather, and the interior is lit with LED lights.

Zetsche said the E-Class comes standard with active brake assist and an attention assist, which can warn the driver of inattentiveness and drowsiness. The car also has a drive pilot, which can keep the car the correct distance behind vehicles in front automatically, along with a remote parking pilot that allows the car to be moved in and out of garages and parking spaces remotely using a smartphone app.

“It’s beautiful and pretty unique, and only 130 units of the car will be made, one for each year the company has been in business,” Zetsche said. “We introduced eight new or updated cars in 2015, sold more than 30 percent more cars over 2014.”

The Mercedes-AMG S63 4MATIC Cabriolet “Edition 130” has leather upholstery in red or black, red brake calipers, and grey or red floor mats. The convertible has a V8 engine that gets 585 horsepower.