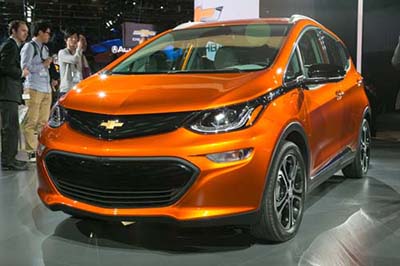 Chevrolet today announced details about its 2017 Bolt EV, which offers an estimated 200 miles of range, at the 2016 North American International Auto Show.

“We are building a global Chevy brand, and in 2015, Chevrolet’s U.S. market share was the highest retail share gain of any full-line manufacturer in the U.S.,” said Alan Batey, president of GM North America. “We have the biggest portfolio of crossovers and SUVs in the marketplace, with the 2016 Cruze coming to dealerships this spring, and a new Cruze hatchback as well.”

As Batey announced details about the Bolt, Mary Barra, chairman and CEO of General Motors, drove the Bolt EV onto the stage, with Mark Reuss, president of GM, in the passenger seat.

“With more than 200 miles range per charge and around $30,000 (with federal subsidies), the 2017 Bolt EV cracks the code of longer range and price,” Barra said.

“When the Bolt hits the road later this year, there will be nothing out there like it,” Reuss said. “It’s practical and a lot of fun on the road — it gets 200 horsepower, goes from zero to 60 miles per hour in less than 60 seconds. We worked with LG Chem to come up with an all new cell with more than 200 mile range, 288 lithium ion cells, with a fast charging of 90 miles of range in 30 minutes.”

Reuss said a typical commute of 50 miles can be recharged in fewer than two hours. He said the small crossover will be built at the GM Orion Assembly in Orion Township later this year.

The Bolt also has a regenerative braking system that has the ability to provide one pedal driving. One pedal driving enables the vehicle to slow down and come to a complete stop without using the brake pedal in certain driving conditions.