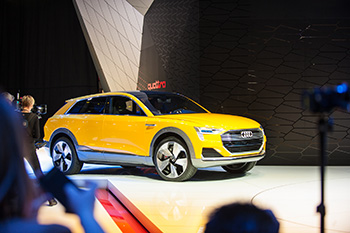 Audi AG today unveiled the 2017 model of the A4 Allroad Quattro, available in the spring, and the H-tron Quattro hydrogen concept at the 2016 North American International Auto Show.

Scott Keogh, president of Audi of America, said the 2017 A4 Quattro is a high-tech, sporty take on the German carmaker’s sedan. The lightweight aluminum-hybrid chassis and redesigned powertrain allow the A4’s engine to produce 252 horsepower.

Keogh said the automaker’s goals were to “transfer technology from the racetrack to the driver by staking out bold visions and reaching targets.”

The technology in the 2017 A4 includes a full color display that gives drivers real-time driving information without having to take their eyes off the road.

Other driver-assistance features include pre-crash detection technology that tenses the front seatbelts and prepares the brake system for high-intensity braking. Audi pre-sense technology can also brake on its own when it detects an impending collision.

“Our mission for Audi is very clear to make the four rings (of our nameplate) shine,” said Rupert Stadler, chairman and CEO of Audi. “We thought Detroit was the perfect place to introduce the Audi H-tron Quattro Concept.”

The H-tron A4 will accelerate from zero to 60 in less than seven seconds and take only four minutes to fill the tank. The all-electric vehicle is powered by a hydrogen fuel cell capable of generating 110 kilowatts of power and a range of 373 miles.

The H-tron concept also includes prototype driver-assistance technology that computes a real-time model of the car’s surroundings. The vehicle’s parking and driver-assist programs will use information from that model to assume tasks at speeds of up to 37 miles per hour.