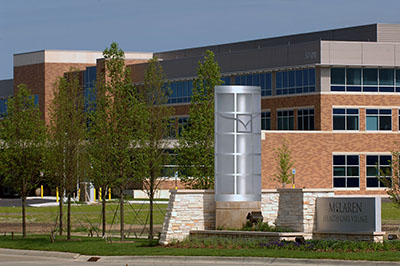 McLaren Oakland will open its new, larger emergency center on the campus of the McLaren Health Care Village in Clarkston later this month.

“Our focus will be on delivering excellent service and high quality emergency care, provided by the same experienced emergency physicians that staff some of the region’s busiest trauma centers,” says Chad Grant, president and CEO of McLaren Oakland, which will own and operate the center.

Grant says the emergency center, to open Feb. 15, is located at the site of a former urgent care, which closed for renovations in November, on Bow Pointe Drive near Sashabaw Road and I-75. He says the emergency center will feature 20 patient treatment areas, including 14 private exam rooms, a cardiac monitoring room, and a clinical isolation room. Other improvements include new flooring and an exterior canopy for ambulance traffic.

“We are increasing staffing to ensure we are prepared to care for any patient that arrives, day or night,” Grant says. “We have added 16 nurses and seven clerks to our team, several of whom have lived or worked in the local community for years.”

McLaren Oakland, founded in 1953, is a 328-bed medical center with a network of more than 300 physicians.