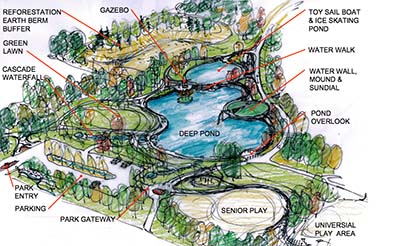 After raising more than $1 million in private funds, the City of Rochester Hills today unveiled plans to add an ice-skating pond, a boardwalk, and a play area for children, among other features at the city’s Riverbend Park.

“The community has come together to create a park concept that will be unlike anything we have ever had,” says Rochester Hills Mayor Bryan Barnett. “As we move forward in this process, our team will be seeking additional funding and grants to help these plans come to life.” He says this is the first time in 20 years the city has taken steps to redevelop the park.

The 130-acre Riverbend Park, located on the north side of Hamlin Road between Crooks and Adams roads, includes two ponds and the Clinton River. Plans for the re-development of the park include a water feature with a water walk, a waterfall, a pond overlook, and a mound with a sitting wall and sundial at its center.

Other plans include a gateway at the park’s entrance, a play area with bocce ball, exercise stations, and a tree house, a sensory garden designed for children with special needs, a kayak/canoe launch, and a crescent-shaped overlook over the Clinton River.

The plans were designed by the Birmingham-based architecture firm DesignTeam+.