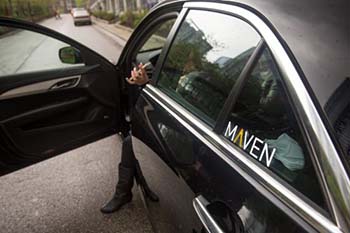 “Whether it’s driving to land the perfect job, meeting friends for a fun weekend, or exploring the city, Maven enables our members to access transportation how they want it, when they want it,” says Julia Steyn, vice president of urban mobility at GM and Maven. “As we continue to expand into key cities, more customers will see how Maven can provide next-gen freedom by seamlessly connecting them with people and places that matter.”

Steyn says in Chicago, the Maven City car-sharing program is now in operation, allowing registered customers to use the Maven app to reserve one of 30 vehicles at more than 15 sites throughout the city. Members can choose between Chevrolet, Cadillac, and Buick vehicles, and have the option of having their vehicles delivered to them.

In Washington, D.C., Maven+ car sharing will be available to residents of the Hepburn, a luxury apartment building opening next month in the city’s Kalorama neighborhood. Steyn says Maven City — open to all qualifying D.C. residents — will launch by the end of June.

Maven City and Maven+ will be available in Boston in the summer.

Steyn says Maven+ is serving more than 5,000 residents in New York and Chicago, while Maven City has doubled in the past 90 days to more than 1,500 customers in Ann Arbor and Chicago.