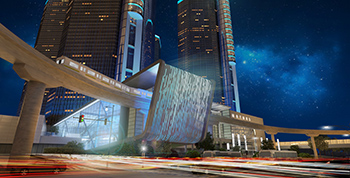 General Motors Co. today announced plans to launch a large-scale renovation of its headquarters at the Renaissance Center in downtown Detroit, which will include a giant LED screen overlooking Jefferson Avenue. Construction will begin this summer and is expected to be completed by late 2018.

Tim Mahoney, chief marketing officer of global Chevrolet, and global marketing operations at GM, says the 120,000-square-foot renovation will include interior updates to make the atrium more inviting and communal, along with the addition of curated spaces to “tell stories about GM” and its brands. The cost of the renovation was not disclosed.

“What we’re going to do is continue to tell (GM’s) story, to continue to transform our world headquarters into really a more modern, more immersive kind of experience as you come through the building,” Mahoney says. “We really believe that when this project is finished, this will be one of those destinations that you would want to come see when you’re in Detroit.” 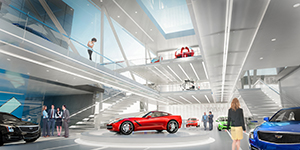 Mahoney also says the automaker is exploring adding a GM store or other retail offerings to the new addition.

The renovations are being handled by Southfield-based Neumann/Smith Architecture and Livonia-based EWI Worldwide.

Last year, the Detroit Marriott at the Renaissance Center completed a $30 million renovation project that updated nearly 1,300 guest rooms, along with the remodeling of meeting room space, a two-level concierge lounge, and 52 suites.

GM acquired the Renaissance Center in 1996 and completed a $500 million renovation in 2003, which included the addition of the wintergarden, a renovated rooftop restaurant (Coach Insignia), and the addition of GM’s corporate logo to the top of the building, among other upgrades.