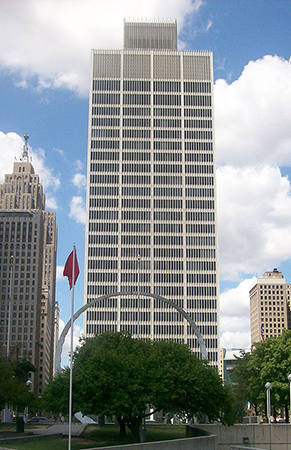 Fifth Third Bank Eastern Michigan announced today it will move its regional headquarters and 150 employees from Southfield to downtown Detroit into the One Woodward Building as part of an $85-million commitment to the city.

The new offices will occupy four floors encompassing 62,000 square feet with options for future growth in the building that will be renamed Fifth Third Bank at One Woodward as part of the lease agreement.

“Fifth Third Bank has long been a citizen of Detroit’s neighborhoods having built numerous branches within city limits during the past decade,” says David Girodat, president and CEO of Fifth Third Bank Eastern Michigan. “Now that we’ve established a footprint in the city, we wanted to move our headquarters to be part of the downtown movement and contribute to the remarkable resurgence Detroit is experiencing.”

The move will occur in phases over the next two years, and relocate approximately 150 of the bank’s employees. The first wave of employees, including the executive leadership team, will move in March.

As part of the bank’s initiative, the company will invest in charitable donations, small business lending, Community Development Corp. tax credit investments, and economic impact contributions related to Detroit over the next five years. The initiative also includes more than $1 million in upgrades and renovations to the Northwest Activities Center at 18100 Meyers Road.

“Fifth Third Bank is staking its claim as the Detroit bank,” says Jim Ketai, CEO and co-founding partner of Bedrock Real Estate Services, which owns and operates the building. “A vibrant downtown is important to the future of the entire state. We certainly believe this is a wise investment in the city and our region.”

Built in 1962, the 29-story landmark One Woodward Building office tower was the first skyscraper designed by architect Minoru Yamasaki, who designed the twin towers of the World Trade Center in New York. The building is also home to the venture capital firm Fontinalis Partners, the Detroit Regional Chamber, and some operations of Quicken Loans.