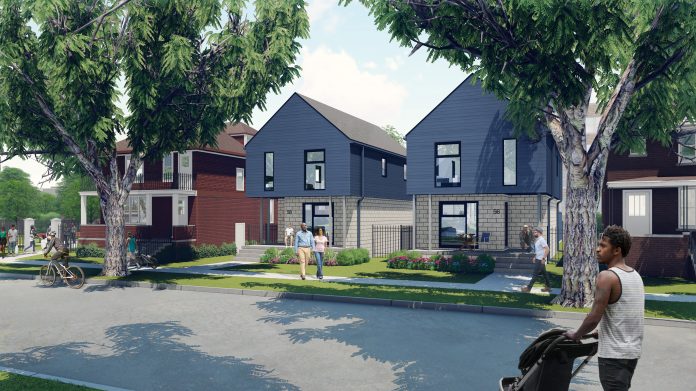 The project will renovate vacant homes and build new ones on vacant lots — the latter would include single family homes and attached homes, such as duplexes and triplexes. In the first phase of the program, scheduled between now and August 2019, 12 new homes are expected to be built, and seven are expected to be renovated in the North End, while 11 will be renovated in Grandmont-Rosedale.

In phase two of the project, scheduled to take place between 2019 and 2021, Develop Detroit plans to add up to 40 homes. Renovations are slated to begin in June.

The project is Develop Detroit’s first steps into homebuilding and will be the first scaled, for-sale new construction in the North End in decades. Homes built in Grandmont-Rosedale will be in partnership with the Grandmont-Rosedale Development Corp.

“After months of planning, we’re happy to announce this project and continue to make strides toward enhancing and reinforcing the urban vitality of the North End and Grandmont-Rosedale neighborhoods,” says Sonya Mays, president and CEO of Develop Detroit. “This project goes beyond creating affordable housing for Detroiters, particularly in the North End. It will add needed energy, increase neighborhood density, and provide more opportunities for residents, existing and new.”

“Develop Detroit’s work to build housing that is affordable and dynamic is aligned with the city’s goal to build one Detroit for all of us,” says Arthur Jemison, director of housing and revitalization for the city of Detroit. “This development and investment will drive inclusive growth in the North End and Grandmont-Rosedale and give residents an opportunity to participate and live where they desire, no matter their income or background. We’re proud to have an organization like Develop Detroit doing this important and inclusive work in our city.”

“This initiative is a testament to the impact of Develop Detroit’s entrepreneurial approach to revitalizing homes and neighborhoods,” says Thomas Bledsoe, president of HPN. “Develop Detroit is built upon the best practices of HPN’s national network of high-performing nonprofit developers. It’s exciting to see the expertise and capital we bring successfully leveraging the power and commitment of their partners in city government, community organizations, and institutions like JPMorgan Chase, to create new homeownership opportunities for Detroit residents.”

JPMorgan Chase and Co., The Ford Foundation, and the Kresge Foundation invested in Develop Detroit.