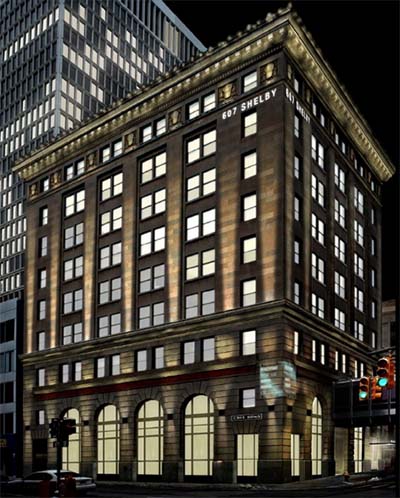 The Shelby Congress Building in downtown Detroit, built in 1925, is undergoing renovations and will be transformed into a boutique office building with ground floor restaurants.

The nine-story, 50,000-square-foot building, at the corner of Shelby and Congress, near Cobo Center, was acquired by Roger Basmajian, founder of Basco of Michigan Inc. in Southfield, for $1.3 million, along with a five-story building at 220 W. Congress St. and a building designed by Albert Kahn at 751 Griswold St. Combined, he paid $2.7 million for the three properties.

The Shelby Congress structure recently received a 10-year tax incentive for commercial rehabilitation from the City of Detroit. PM Environmental in Berkley helped secure the tax incentive, which can cover expenses related to demolition costs, asbestos removal, and environmental due diligence.

PM Environmental will also be a tenant in the building, and will move about 12 employees into the space once renovations are complete. “We’re moving our industrial hygiene group, which is a lot of the asbestos and lead-based paint assessments and some of our due diligence group (into the building),” says Michael Kulka, founder and CEO of PM Environmental.

Basco of Michigan will renovate the interior, mechanicals, and the elevator of the Neoclassical-style Shelby Congress Building. Architect Harry S. Angell designed the structure, which was once known as the U.S. Mortgage Bond building.

Space is available to rent on the first and second floor for $25 per square foot. The other two buildings also will be renovated for office and restaurant uses.