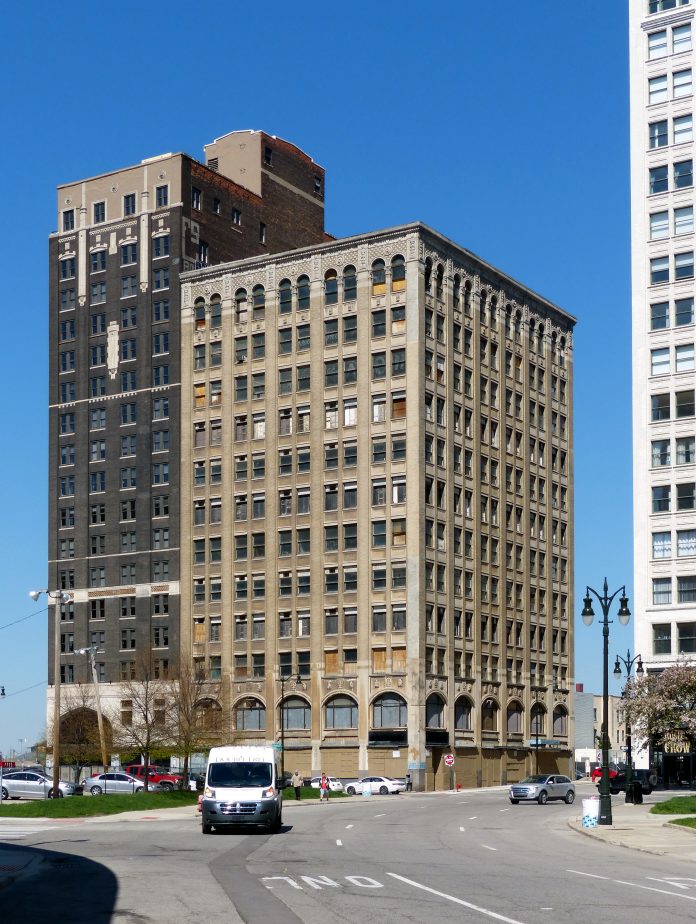 Detroit’s Kraemer Design Group, an architecture, interior design, and creative firm, Monday announced it is the architect, designer, and historic consultant on the renovation of the Park Avenue Building.

Located at 2001 Park Ave. at W. Adams Avenue at the western edge of Grand Circus Park, the former office building will become a mixed-use building of apartments (the final number of units has not been finalized) and about 5,000 square feet of first-floor retail space. The building is 104,500 square feet and has 12 stories. It was once known as the General Necessities Building and was designed by Albert Kahn in 1922.

Kraemer is in preliminary phases of the project, which includes rehabilitating the façade and fire escape. Laura Cunningham is senior project architect, while Rino Soave, owner of Novi’s Infinity Homes and Co., purchased the building in April and is the developer.

The building has been vacant for decades and will require structural updates and new infrastructure to accommodate future residents and retail tenants. Soave wants the Kraemer team to stabilize the neglected historic elements and plans for a complete restoration.

“As part of Detroit’s Grand Circus Historic District, the Park Avenue Building is among several in-progress projects currently in our portfolio that will be restored, ensuring more parts of Detroit history are preserved for future generations to enjoy,” says Bob Kraemer, principal at Kraemer. “For more than 20 years we have played a role in the historic preservation of buildings that have been essential to Detroit’s revitalization, and our team has the right expertise and innovation to bring new life to this nearly century-old building.”

Kraemer is working on other historic buildings in Detroit, including the Detroit Life Building at 2210 Park Ave. and the former Women’s City Club building at 2110 Park Ave. Both projects were also part of the Park Avenue Association and are part of the District Detroit plans announced by Olympia Development earlier this year. Other Kraemer projects include the David Stott Building at 1150 Griswold, the Detroit Free Press Building at 321 W. Lafayette, the Albert Kahn Building at 7430 Second Ave., and the Leland Hotel at 400 Bagley Ave.

The firm is responsible for a significant amount of historic work in Detroit and throughout Michigan, securing 43 percent of the estimated $158.7 million of qualified rehabilitation costs cited in the National Park Service Historic Tax Credit report for projects completed in the state in 2017.

Kraemer also includes worked on the renovation of the Detroit Foundation Hotel, David Whitney Building, and Lofts of Merchants Row, all in Detroit; East Main Redevelopment in Milan, Mich.; and the Durant Hotel in Flint.