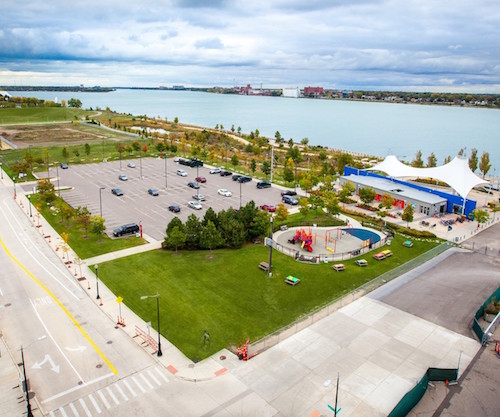 The Detroit RiverFront Conservancy, a nonprofit organization responsible for the public spaces located along the city’s riverfront, has raised $163 million through its capital fundraising campaign for the city’s East Riverfront, exceeding its original goal of $140 million.

“The capital campaign was an overwhelming success, and illustrates the broad coalition of business, philanthropic, and governmental leaders who have come together to make this dream a reality,” says Matt Cullen, chair of the conservancy’s board of directors. “We are proud of the incredible transformation of the riverfront from underutilized, blighted industrial land into a world-class public space.”

He says the campaign achieved success through donations and gifts, with initial support coming from three main partners: The Kresge Foundation, City of Detroit, and General Motor Co.

Private individuals, government entities, and a number of foundations also contributed to the campaign, which has funded the redevelopment of the East RiverWalk over the past 12 years.

Proceeds from the campaign have also been used to fund other projects such as adding pavilions and handicapped accessibility to areas in Gabriel Richard Park and the Dequindre Cut.

“What we’ve done from a public space standpoint has truly added an economic impact,” says Will Smith, CFO of the conservancy. “We’ve added over a billion dollar investment over the past ten years, and we’re expecting another billion dollars plus in the next ten years.”

He says the conservancy plans on using more of the funds to finish revitalizing the 5.5 miles of riverfront area between the MacArthur Bridge and the Ambassador Bridge. More than 3.5 miles on the East RiverWalk is currently complete, with plans to start a West RiverFront campaign soon.

A recent economic study found that more than $1 billion in public and private investment had occurred along Detroit’s riverfront from 2003 to 2013. The same research forecasted an additional $1 billion of investment over the next 10 years. In the last two years, more than $195 million has been invested in the East Riverfront district.

For more information about the riverfront plans, click here.