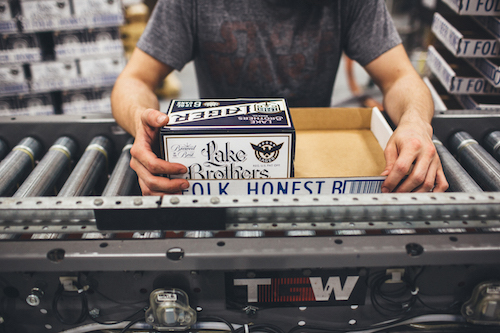 “This brand is inspired by some of the classic regional brands that used to exist years and years ago,” Farrell says. “Some of them are still in existence, but a lot of them went under in the ’70s and ’80s. There are a number of them that served as an inspiration for us.”

Farrell says the beer is brewed with cluster and liberty hops, Midwest malted barley, and water from the Great Lakes. He says the beer features an amber color and malt aroma. The beer will be available year round in 12-ounce cans.

“There are so many great microbreweries that produce eight, 10, or 12 beers a year that do an awesome job; we are not trying to be that brewery,” Farrell says. We are trying to make the best lager that we can. It’s a style that a lot of places simply don’t make.”

Farrell says that he and Grodecki have been working on the brand for two years and intentionally sought out a facility with staff that would be able to help further their goals, which include becoming the premier lager in the Great Lakes region.

“It wasn’t by happenstance that we partnered with Brew Detroit,” Farrell says. “The team there is top-notch and the equipment is state of the art, but most importantly is (our brew master) — his training and his passion is making the exact style of beer that we wanted to create.”

The brand, which began distribution in May, has more than 100 accounts, including The Peterboro restaurant in Detroit’s Midtown district. Farrell says most of the accounts are in the metro Detroit area, with a number in the surrounding region.

“It’s a growing number, and hopefully it will continue to grow each and every week as we raise awareness of the brand,” Farrell says.