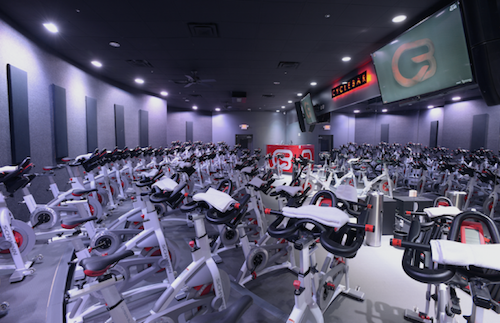 “Boutique fitness is exploding,” says Jeff Wayne, franchise owner of CycleBar Northville. “Some people are migrating away from big-box gyms. We describe our ride as communal, intoxicating, and fun. People like that environment.”

Each location will feature 50 Schwinn Carbon Blue bikes, CycleBeats and CycleTheater, which are the franchise’s in-house online music database and audio and video system.

Classes offered include Classic, CycleBar’s primary workout that consists of a mix of upper body work and hills; Performance, which allows cyclers to compete in group challenges against other participants and view data of their ride on screens in the facility; Connect, which combines indoor cycling with yoga; and Theme, specialized classes that feature concert series, DJs, and more.

Classes start at $20, and packages are available.

There are 20 CycleBar locations open nationwide, including one location in Royal Oak. Wayne says there are plans to open more metro Detroit locations in Novi, Bloomfield Hills, Ann Arbor, Rochester Hills, and Plymouth.

Summer Cruising: See the USA in Your Chevrolet