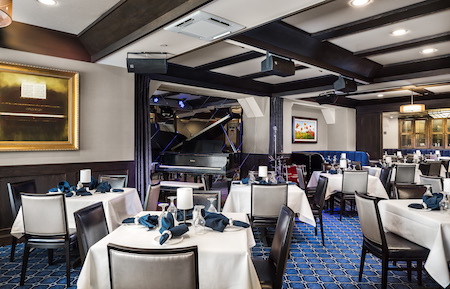 Caucus Club, a fine dining restaurant in Detroit that ran from 1952-2012, will re-open under new ownership on May 12. The 6,000-square-foot restaurant, located at 150 West Congress St., will offer an art deco-inspired, club atmosphere for 155 diners.

Proprietor George Sboukis, a second-generation restauranteur, worked with his Greek immigrant parents to open Riviera Coffee House near Olympia Stadium on Detroit’s west side in the 1950s. The family went on to own Louis’ Chop House in Chesterfield Township where, until recently, Sboukis was a partner.

“With the reopening of Caucus Club, I’m proud to provide the city with a first-class restaurant destination that has its roots in history but which is a celebration of what Detroit is today,” says Sboukis. “The hospitality part of the business is very important to me, as it was to my parents. I love greeting diners and getting to know them.”

Under the direction of executive chef Rick Hussey, the Caucus Club menu is reminiscent of a New York steakhouse, and will include daily specials, dry-aged steaks, mint pesto lamb, prime rib, and an array of seafood dishes. Bread will be baked fresh daily, and desserts will include seasonal panna cotta, cheesecakes, tiramisu, and crème brulee.

The bar will feature the New Bullshot, an update to the original Caucus Club’s signature drink, which originated in Detroit and was essentially a Bloody Mary with beef broth instead of tomato juice. The New Bullshot, created by bar manager Mike Kreger, contains homemade beef stock and an Italian gin.

Sboukis worked with Wendy Silverman, a designer from Scott Shuptrine Interiors, and architect Richard Burmann, to renovate the restaurant. Some of the historic features of the Caucus Club remain, including an original phone booth, marble from other parts of the building used to restore the bar, and a glass display case to showcase memorabilia from the original Caucus Club.

Barbra Streisand performed in the lounge area starting in the 1950s, but Sboukis, a jazz aficionado, has built a new stage to showcase local pianists and singers.  A Baldwin grand piano, built in 1952, has been tracked down and is featured on the stage.

More information about the re-opening can be found here.