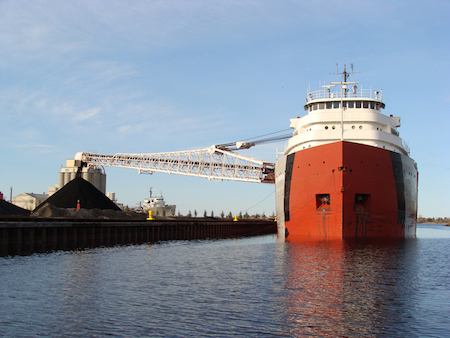 Though the season began on March 20, spring cargo numbers from the St. Lawrence Seaway and U.S. ports are indicating a stronger year for the Great Lakes-Seaway shipping industry. According to data from the Chamber of Marine Commerce, total cargo shipments via the Seaway totaled 3.7 metric tons over the last two months, an 8 percent increase over 2016.

“We’re optimistic that 2017 will be a better year for Great Lakes-Seaway shipping,” says Bruce Burrows, president of the Chamber of Marine Commerce. “U.S. iron ore pellet exports to Japan and China that started in the fourth quarter have continued this spring, while U.S. grain shipments remain relatively in line with last year’s strong performance. Road salt volumes are also up over 2016 levels as municipalities replenish their stockpiles throughout the region.”

Great Lakes ports are also reporting a strong start to spring operations, which authorities attribute to mild weather, which allowed barge loads of steel to continue shipping during January and February.

The Chamber of Marine Commerce is a bi-national organization that represents more than 130 marine industry stakeholders, including Canadian and American shippers, ports, terminals, ship owners, and marine service providers.