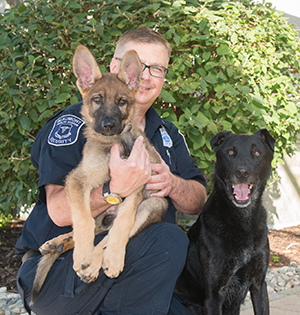 Beaumont Health System has added two new members to its staff — German shepherd dogs to fill open canine security officer positions. The dogs, named Taylor and Titan, will be based at Beaumont Hospitals in Royal Oak and Taylor.

“With everything that’s going on in the world today, we have to be proactive,” says Morris Cotton, deputy system director of security for Beaumont Health. “We don’t want anybody to be afraid, but the way we approach security is changing.”

Cotton, a former Highland Park police chief, made the case to bring canine security officers to the hospital system. He says the dogs are trained in bomb detection, aggression, and obedience. 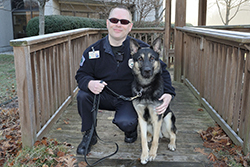 He says the dogs are trained to act aggressively only on command.

Titan, a 10-week-old pup trains side-by-side with Rick Warznie, the handler at Beaumont in Royal Oak and his security dog, Storm, who at 8 years old is approaching retirement. Taylor, the other German Shepard, is based at Beaumont Hospital in Taylor.