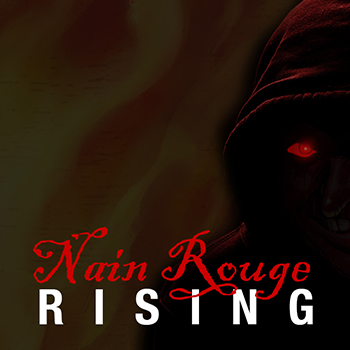 “What has began as an attempt to resurrect an old Detroit legend has grown into an internationally acclaimed book series, graphic novel, and even an annual parade,” Bastian says. “Now we’re ready to bring everybody along to help us make a movie.”

Bastian says the book series is based on the Nain Rouge, French for “Red Dwarf,” a demonic mythical creature known as the “harbinger of doom” that appears before negative events in Detroit. The books follow two teens trying to drive the creature from the city using the power of positive thought and action.

Bastian, who also blogs regularly for DBusiness, says he decided to write stories on the Nain Rouge after a friend had told him of the legend and found that very little had been documented.

Bastian and Winans, along with Amy Weber, an Emmy Award-winning filmmaker and Michigan native, have created a two-minute trailer to help promote the short film and have enlisted the public’s help to raise $50,000 through a crowdfunding campaign.

“This short film will be the precursor to the full-length feature that we all want to make,” Weber says. Nain Rouge Rising will be the prequel to the 2014 crowd-funded graphic novel Nain Rouge: The Red Legend.

After the funding goal is reached, Weber will direct the short film in Detroit based off a screenplay written by Steve Kopera, who grew up in Troy.

“We’ll shoot this summer,” Bastian says. “It’s a three day shoot, and ideally, we’d like to premiere it in the fall around Halloween time.”

Bastian says the short film will then go into the festival circuit and, with exposure to Hollywood, hopefully become a feature length film.

“We already have some interest from Hollywood, but we feel like this short film will put us over the top, give us an opportunity to bring other people in from the community to be a part of it, and for us to really have fun with it,” Bastian says. “We’ll lose more control when we move to that level (Hollywood) … and this is one of the last things we can do (with full creative control).”

The crowdfunding campaign, which seeks to hit its goal within 45 days, is coinciding with the annual parade, Marche Du Nain Rouge, to be held this Sunday. The parade — in its 7th year — is celebrating its one-year anniversary in which revelers ceremoniously work to dispatch the presence of the red imp with positivity each spring equinox.

Marche Du Nain Rouge will begin after 1 p.m. at 511 West Canfield in Detroit heading south on Second Avenue and turning west on Temple Street, before ending at the Masonic Temple. Attendance is free to the public and after parties will take place after the event.