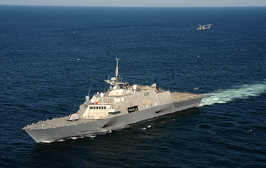 The commissioning of the USS Detroit, a new Freedom-class littoral combat ship, scheduled to arrive in September and dock at the Renaissance Center in downtown Detroit, has been delayed and will now arrive in October.

“It’s ‘good news-bad news,’” says John Peracchio, chairman of the USS Deatroit Commissioning Committee.  “On one hand, we’re excited and can’t wait to see the ship dock at the RenCen become part of the Detroit and Windsor shoreline, and then make history by being commissioned here in Detroit. On the other hand, the added month adds to the anticipation and gets more people involved.”

The commissioning of the ship, which is being built at the Lockheed Martin Marinette Marine shipyard in Marinette, Wis., has been pushed back repeatedly due to sea trials and construction delays and will take place on Oct. 22.

Peracchio says ship-commissioning dates can be moving targets and subject to change because of the many activities involved in the construction and sea/acceptance trials of a modern warship.

The new USS Detroit is the sixth U.S. Navy warship to bear the city’s name. The ship will undertake a variety of missions in coastal waters as well as humanitarian relief missions.  Capable of open ocean operations, the modular design supports interchangeable mission packages, which will allow the ship to be reconfigured for antisubmarine warfare, mine warfare, or surface warfare missions as-needed.

The ship was launched and christened in October 2014. The first USS Detroit was a 12-gun ship, built by the British at Malden, Canada, in 1813 and captured by the U.S. Navy in the Battle of Lake Erie in September 1813 during the War of 1812. A previous USS Detroit (CL 8), a light cruiser, was one of the few ships to get underway during the attack on Pearl Harbor and earned six Battle Stars during World War II. She was moored with the battleship USS Missouri during the surrender ceremony in Tokyo Bay in 1945.