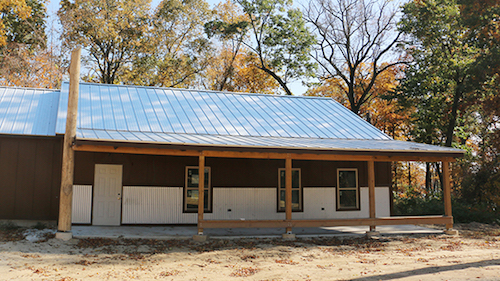 Following years of planning and fundraising, North Star Reach, a 105-acre barrier-free and cost-free camp for children with serious health challenges, will open in Pinckney on July 3. A grand opening ceremony will be held on June 25.

“It’s been a long journey,” says Doug Armstrong, CEO of North Star Reach. “But we’ve taken care to build the type of camp we wanted, and now we can give children who might otherwise not get this opportunity a place where they will be safe, make new friends, and have fun away from home and outside of a hospital.”

Twenty years ago, Armstrong, a nurse and former clinical research director at the University of Michigan Transplant Center, began working on the project. A colleague, Vicki Shieck, joined him when they began taking groups of young organ transplant recipients to a weeklong, sleepaway camp every summer.

The new camp facility features a state-of-the-art health center staffed around the clock by nurses and physicians. Nearly 100 children who have received organ transplants will attend the first session, from July 3-9. Children with congenital heart conditions will attend camp’s second session (July 17-23), followed by children with sickle cell and blood disorders (July 31-August 6).

By next summer, North Star Reach plans to expand its programming, and will eventually accommodate 1,500 children and families annually. The nonprofit also aims to offer family weekend retreats apart from the summer months.

Construction costs and funding for two years of operations is $26.2 million. North Star Reach has raised about $25 million toward that goal through a capital campaign. Featuring a camper-to-counselor ratio of two to one, the camp is free, regardless of a family’s ability to pay. The weekly cost for each camper is $2,500. Annual fundraising, endowment and planned giving will support long-term operations, which includes camp fees.

Funding and support also comes by way of North Star Reach’s affiliation with SeriousFun Children’s Network, founded by the late actor and philanthropist Paul Newman. The foundation’s mission is to give children with serious health challenges a place where they could “raise a little hell” (in the spirit of one of his favorite movie roles, Butch Cassidy) and to just be kids.

“Our campers will feel normal here, like they are somewhere they belong with other children just like them,” Armstrong says. “They’ll discover that they are capable of so much more than they ever thought possible through this authentic camp experience.”

When North Star Reach officially opens to campers July 3, it will become the ninth SeriousFun Camp in the country. Through the relationship, North Star Reach will join a growing international network of more than 30 independently run camps and programs serving nearly 60,000 children (and their families) with serious medical challenges each year.

The North Star Reach grand opening ceremony from 2-5 p.m June 25 is open to the public. For more information, visit northstarreach.org.