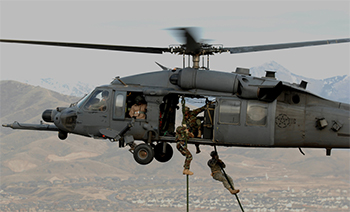 Southfield-based law firm Nyman Turkish PC has successfully defended a Michigan war veteran who sued the U.S. Department of Homeland Security for forcing him to relocate back to his border patrol position in Texas, which the veteran says reminded him of Afghanistan.

“All I want is to be able to continue serving my country,” says U.S. Army Sgt. Anthony Gazvoda, who remains active in the Michigan National Guard. “I just can’t do it in a place that constantly reminds me of where I was repeatedly shot at.”

U.S District Judge Thomas Ludington ruled Homeland Security can’t force Gazvoda to relocate back to a position in Laredo where he briefly worked until post-traumatic stress disorder symptoms forced him to take unpaid administrative leave and return to Michigan.

Gazvoda is a native of Chassell, near Houghton in the Upper Peninsula. He served in Afghanistan, participating in 34 firefights, and was awarded an Army Commendation Medal with Valor. He says last November, Homeland Security denied his request for a compassionate transfer and warned he would be considered AWOL (absent without leave) and could be disciplined or fired if he didn’t report to Laredo within three days.

“This is not how you treat a decorated war veteran,” says Jason Turkish, managing partner of Nyman Turkish. “Gazvoda put his life on the line for his country in war, and now he simply wants a fair shot at continuing to serve his country back home.”

Turkish says the next step in the case is making the injunction permanent by proving to the court that suitable postings in another climate have been, and are available within, the department. Gazvoda’s request for a job on the Canadian border in Sault Ste. Marie or Port Huron will be granted.