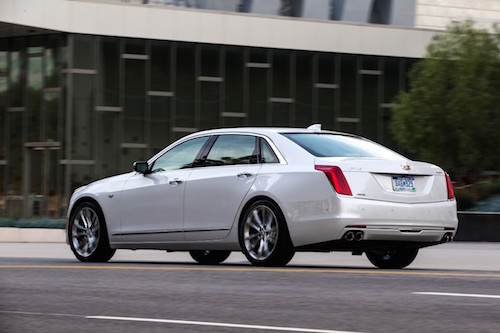 The same cameras are used to provide a 360-degree display around the CT6 to aid in vehicle maneuvering, as well.

“(The video recording system) can be used if you want to record a great Sunday drive,” says Donny Nordlicht, assistant manager of product and technology communications at Cadillac. “It can also be used for security reasons. Given that the recorder can be activated when the vehicle is locked and automatically record when the alarm goes off, it can also be used for safety and security in situations where you want to record when you’re driving.”

In addition, the CT6 sedan contains an updated rear seat infotainment system that features a built-in Wi-Fi hotspot and HDMI inputs, which will allow owners to use devices such as Google Chromecast, Amazon Fire TV stick, and Apple TV to stream content.

The high-definition, 10-inch screens, which are integrated into the vehicle’s cabin, can also play media from Blue-Ray DVDs and smartphones.

“A large portion (of CT6 customers) will be adults who often use the vehicle for business, so they’ll be able to take something with a small screen like a phone or a tablet and put it much more comfortably on a larger screen right in front of them,” Nordlicht says. “Also, for those buyers who might have children or friends who are using the vehicle for road trips, it allows for multimedia streaming.”

The CT6 is one of eight new vehicles that Cadillac will launch by the end of the decade as part of its $12 billion product investment.

IN RELATED AUTOMOTIVE NEWS: General Motors Co. has developed a new technology for the 2017 GMC Acadia that reminds drivers to check the back seat as they exit their vehicle.

“Acadia drivers live busy lives with demanding schedules, and the Rear Seat Reminder helps protect the things we care about most,” says Tricia Morrow, global safety strategy engineer at GM. “Whether it’s your lunch, laptop, pet, or most importantly, your child, it’s easier than it seems to forget what’s in the back seat when moving between life’s events.”

The Rear Seat Reminder, which will be a standard feature on the new 2017 Acadia, is intended to activate when a rear door is opened and closed within 10 minutes before the vehicle is started.

The next time the vehicle is turned off after a door activation, the Acadia is designed to sound five chimes and display a message in the driver information center that reads, “Rear Seat Reminder / Look in Rear Seat.”