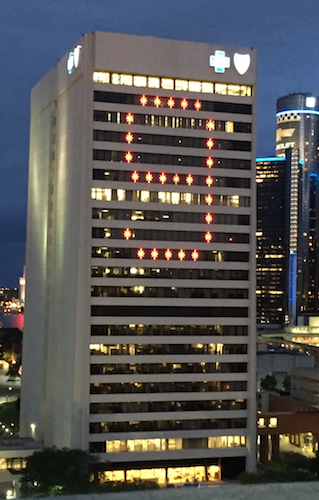 “We are honored to put Gordie Howe’s No. 9 in lights to recognize Mr. Hockey for the memories he gave us on the ice, and the generosity and good spirit he showed us off the ice,” says Daniel J. Loepp, president and CEO of Blue Cross Blue Shield of Michigan.

The nine-story tall display will appear nightly in red LED lights on the north and south sides of the building, located at 600 E. Lafayette.

“We light our building regularly to recognize and celebrate important causes and events that impact our community,” Loepp says.

Blue Cross Blue Shield also has a billboard tribute to Howe located on Jefferson Avenue at I-375 near its offices in the Renaissance Center. Both displays will exhibit until June 27, the night of the annual Ford Fireworks Detroit.

Blue Cross has been lighting up its building for more than 10 years to support causes like breast cancer, with a pink ribbon, and heart health, with a heart-shaped display, along with a Christmas tree during the holiday season.