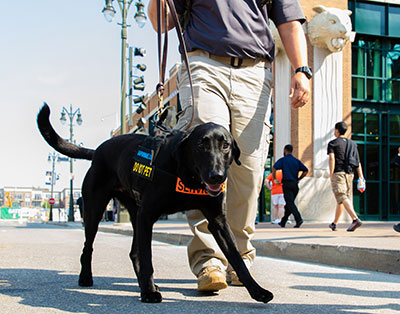 Ilitch Charities and the Detroit Tigers Foundation have partnered to donate $135,000 for three “vapor wake” bomb-detecting canines to the Michigan State Police, Wayne State University Public Safety Department, and the Detroit Police Department. The dogs are the first of their kind in the state.

“Thanks to the generosity of Ilitch Charities and the Detroit Tigers Foundation, the Detroit Police Department is able to maintain its state of constant readiness and protect our citizens from the unthinkable,” said Detroit Police Chief James Craig.

Craig says the so-called vapor wake canines are a new breed of bomb-detecting dogs that are more sophisticated than the average explosive detection dogs.

Unlike their traditional detection counterparts, vapor wake dogs smell and target the odor of hand-carried or body-worn explosives in real time while a target is in motion.

As a result, the patented dogs can screen hundreds of people at an event or a concert in a non-obtrusive way. If someone is carrying explosive material, it will leave a scent trail or “vapor wake” that the canine will detect, leading the trained handler to the source of the scent.

Craig says the three newest members of Michigan’s law enforcement team will be seen at events and locations throughout the summer and fall, including sporting events, concerts, airports, theaters and large event venues throughout southeast Michigan.