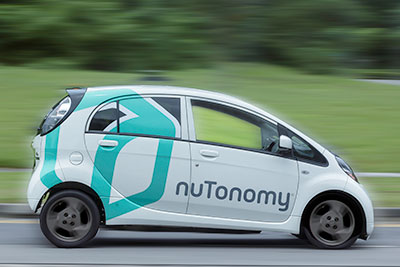 NuTonomy, a leading developer of software for self-driving cars, has completed $16 million in funding led by Highland Capital Partners, along with Detroit-based investors Fontinalis Partners and Australia-based Signal Ventures, to accelerate the company’s plan of creating a fleet of autonomous taxis.

“NuTonomy’s self-driving software is ushering in a new era of autonomous mobility,” says Chris Thomas, founder and partner at Fontinalis Partners. “The opportunity to partner with teams like nuTonomy’s—groups that are reshaping transportation systems around the globe—is the reason we founded Fontinalis.”

Thomas says NuTonomy is pushing to become the first company to deliver an autonomous taxi service by 2018.

Besides Michigan, the company is currently operating self-driving cars in Singapore and the United Kingdom, where it is testing software in partnership with major automotive industry players such as Jaguar Land Rover.

The company has pioneered technology from researchers at the Massachusetts Institute of Technology based on methods employed on the development of spacecraft, airplanes, and other complex, safety-critical autonomous systems.