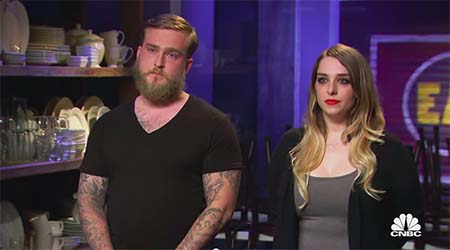 The team from Hamtramck’s Rock City Eatery will compete on CNBC’s reality competition show, Restaurant Startup, on Tuesday. The popular eatery has earned high marks for its rotating menu of specials, including scallion pancakes with toppings like pork belly with hoisin sauce.

Rocky City Eatery owner and chef Nikita Santches, and his fiancé, Jessica Imbronone, will compete on the show against Sixpence Pie Co., a business based out of Connecticut.

Restaurant Startup is a reality show hosted by celebrity restaurateurs Joe Bastianich and Tim Love. Each week, the hosts choose between two teams. The team they select has 36 hours and $7,500 to refine their ideas and launch a pop-up. Bastianich and Love then ultimately decide whether to invest in the company. The show will air at 10 p.m.

For the show, the two teams will compete in creating and producing dessert pies. Santches got his start in a cooking class at Andover High School in Bloomfield Township, and has since turned out such pie flavors as buttermilk blueberry, strawberry rhubarb with basil and balsamic drizzle, and white chocolate cherry.

Restaurant Startup describes the “Rock City Pies” team as “a rock ’n’ roll couple from Detroit who want to take their hand-crafted delights and turn them into a nationwide sensation.” The show describes Sixpence Pie Co. as “two suburban soccer moms from Southington, Conn.”