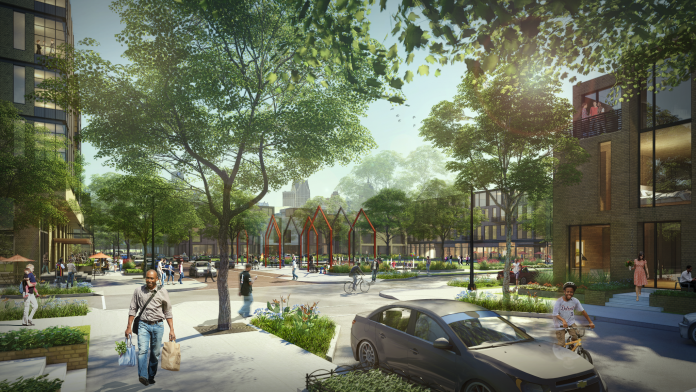 The Detroit City Council approved a development agreement on Tuesday that will pave the way for affordable housing investment across Detroit. Bedrock, in partnership with local developer Woodborn Partners, proposed a mixed-income neighborhood on one of Detroit’s largest vacant properties, the 22-acre former Fredrick Douglass public housing site in Brush Park.

With the proceeds from the $23 million sale, the Detroit Housing Commission will invest in existing public housing, preservation, and renovation of other affordable housing units throughout the city, as well as construction job training initiatives for Detroit residents.

“This deal is a win for the entire City of Detroit. First, a long-vacant site adjacent to downtown will finally see redevelopment that will bring quality housing with significant affordable options and more amenities to the neighborhood,” says Mayor Mike Duggan. “Second the proceeds from this sale will transform public housing in Detroit by accelerating the preservation and renovation of affordable units across the city, allowing us to keep people in their homes and provide a higher-quality of housing.”

The site has been vacant since the former Frederick Douglass public housing structures were demolished in 2014. The site provides a unique opportunity to build a bridge between the Brush Park and Eastern Market neighborhoods.

“The Douglass Site gives us the unique opportunity to create a development that will offer something for everyone and bring a sense of community back to a space with such a rich historic legacy for so many Detroiters,” says Dan Gilbert, chairman of Bedrock. “Parks, courtyards, retail, affordable housing, and for-sale units are all in the mix on this project and we look forward to working with our partners to create a thriving and diverse community with opportunity for all Detroiters to enjoy.”

The master plan also proposes amenities including more than 3.2 acres of open spaces in the form of parks and courtyards, 18,000 square feet of retail space, more than 1,100 parking spaces, an early childhood education center, and a small hotel.

Located just east of Brush Park, the Frederick Douglass site represents the southern portion of what was once the Brewster-Douglass public housing development. The Frederick Douglass towers were vacated in 2008 and demolished in 2014, and the site has sat vacant since that time. At its peak capacity, the combined Brewster-Douglass development housed between 8,000 and 10,000 residents.