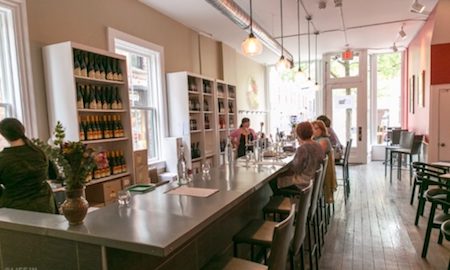 Black Star Farms, which has operations on both the Leelanau and Old Mission peninsulas near Traverse City, will begin to offer wines from other northern Michigan vintners at its VinBar wine bar in downtown Ann Arbor (111 W. Liberty St.). The bar and store opened in 2015.

“We are going through the licensing process right now, and we will be adding two more wineries in the next few weeks,” says Sherri Campbell Fenton, director of communications and public affairs at Black Star Farms. “In addition to our wines, which customers can order by the glass, by the flight, or by the bottle, we also offer L. Mawby sparkling wines (located on Suttons Bay).”

VinBar, which can accommodate up to 40 people, also offers craft cocktails using Grand Traverse Distillery spirits. In addition to a selection of red and white wines, Black Star Farms also offers a number of fruit brandies. The bar provides a light fare of food, including Black Star Farms artisan crackers and artisan granola.

In addition, customers can purchase bottles of wine at the bar (store) to go, while Black Star Farms wine club members can pick up their orders rather than have them shipped. The winery also operates a store (Grand Traverse Distillery tasting room) in Frankenmuth.

“At VinBar, we often get requests for other wines, and now we will be able to soon meet those requests,” says Campbell Fenton. “Northern Michigan wines, especially the white wines, have won international awards for years, so we wanted to give people in the Ann Arbor market more of a taste of what we and other wineries offer.”