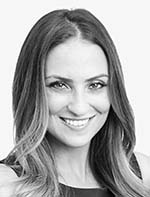 Heather Zara’s friends thought she was crazy to quit her 10-year sports broadcasting career to open a video company that specializes in TV commercials, branding videos, philanthropic films, and weddings.

“It’s funny because I never thought I’d be an entrepreneur, but I was always fascinated with why people became successful,” Zara says.

She started with zero funding but, in just over three years, Zara Creative has grown to serve more than 500 clients ranging from nonprofits to Fortune 500 companies. It has nearly doubled its sales every year.

Zara estimates that weddings make up about 35 percent of her business. They’ve taken her and her crew to far-flung destinations like Cancun and Miami, and in Michigan to Petoskey and Glen Arbor. Because her business has grown so much, Zara recently turned over supervision of the wedding portion of her firm to one of her employees.

Zara, meanwhile, maintains direct responsibility for the rest of the business. “It’s really cool because it almost ties back to my days as a reporter,” she says. “Every time I work with a client I get to learn about their business.”

The video storyteller prides herself on always trying to push the creative envelope for clients. One client, a lawyer, wanted a commercial shot in his library, with him standing in front of shelves of law journals.

“After he told us what he was looking for, I asked him if he was married to that idea,” Zara says. “I just thought we could do something more creative.”

Instead, she made a commercial intended to make the attorney’s target audience laugh. “The lawyer wasn’t even in it,” she recalls. “He ended up getting a ton of new business and we won a national award.”

Zara says her philanthropic efforts are a driving force in her life: She works with more than 30 Detroit-area nonprofits, serves on committees for the Boy Scouts of America, and is one of the sponsors of the newly-relocated Ronald McDonald House at the Detroit Medical Center.