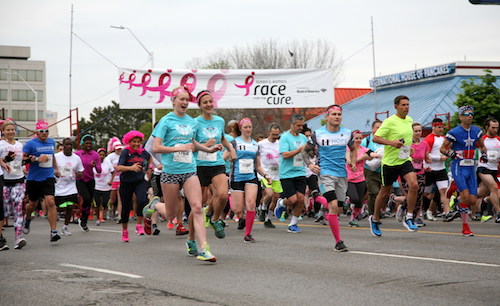 The 25th Susan G. Komen Detroit Race for the Cure, locally presented by Karmanos Cancer Institute in May, raised more than $1 million in net proceeds. After a needs assessment process, nearly $719,830 of the funds has been awarded to three Detroit-area breast cancer programs.

“Although we have come a long way since our first Detroit Race in 1992, our work is far from over,” says Brian Christy, co-chair for the Komen Detroit Race. “Our 2015 needs assessment on our Detroit service area (representing Wayne, Oakland, and Macomb counties) showed significantly higher incidence of late-stage diagnoses and deaths from breast cancer compared to the rest of Michigan. We are committed to help close this disparities gap…”

The Dearborn-based Arab Community Center for Economic and Social Services has been awarded about $63,825 from race funds, which will allow the facility to continue to offer one-on-one health education and free mammograms to low-income, Arab American women in Wayne, Oakland, and Macomb communities.

More than $370,540 has been awarded to the Wayne County Breast and Cervical Cancer Control Program, which will allow for more breast screenings and help navigate women to Affordable Care Act programs.

A $462,000 Helping Hands grant to Karmanos Cancer Institute will continue to cover diagnostic and limited treatment for uninsured and underinsured women and men who are not eligible for support.

The event featured a panel of breast cancer experts from Karmanos Cancer Institute and Wayne State University School of Medicine, and information was shared on Susan G. Komen’s goal to reduce U.S. breast cancer deaths by 50 percent in 10 years.