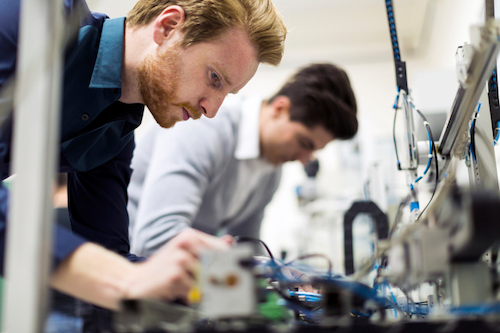 Supported by a $3.5 million grant from the National Science Foundation’s Innovation Corps program, the University of Michigan Engineer’s Center for Entrepreneurship in Ann Arbor is leading a new four-university alliance to assist Midwest researchers in turning their inventions into marketable products.

The universities, which have a combined annual research budget of $2.6 billion, have already sent more than 100 teams to the NSF National I-Corps program and trained more than 400 teams and 1,200 participants throughout the respective university regions. The node is designed to form the backbone of a network that educates, supports, and connects academic researchers to the entrepreneurial ecosystem across the regions.

“The geographic spread, diverse industrial base, and scale of the node will help the entire region connect technology, market needs, people, and money together in a way that was not previously possible,” says Jonathan Fay, Midwest I-Corps Node executive director and managing director of the U-M Center for Entrepreneurship.

To achieve the goal of creating a collaborative network utilizing resources and expertise external to each university, the node will host training programs for scientists and engineers throughout the region. Courses will be designed to get scientists and engineers to extend their focus beyond the laboratory, such as examining the commercial potential of their technology to avoid building a product that no one wants.

The Midwest I-Corps Node will be formally launched in January, and will be funded for five years. In addition to hosting the National I-Corps program, each of the four universities will host regional programs across their respective states.

The mission of U-M’s Center for Entrepreneurship is to empower the entrepreneurial spirit of The University of Michigan College of Engineering to drive the impact of innovation in Michigan, the nation, and in the global economy.