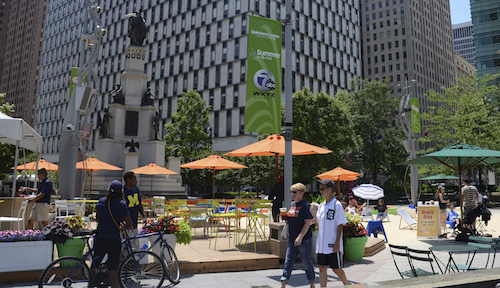 Just over 90 percent of residents across metro Detroit have an overall positive impression of downtown Detroit, which is up from 82 percent in 2014, says a new report from the Downtown Detroit Partnership.

Over 4,000 people from the Detroit-Warren-Livonia Metropolitan Statistical Area completed the partnership’s Downtown Detroit Perceptions Survey, 30 percent of who live inside the Detroit city limits.

According to the report, 83 percent of respondents say their opinion of downtown Detroit is more favorable than a year ago, which is an increase from 78 percent in 2014.

Four out of 10 people say they visited downtown for nonwork-related activities more than 20 times during the last 12 months.

The top three activities people do while visiting downtown are dining out, attending sporting events, and strolling, while the top three destinations are Campus Martius Park, Detroit RiverWalk, and Comerica Park.

Looking forward, 98 percent agree that downtown Detroit has a lot of potential, which is up from 96 percent in 2014.

“This survey gives us a powerful tool to measure our progress, and the effectiveness of our programs,” says Eric Larson, CEO of Downtown Detroit Partnership. “We look forward to these results every year so we can gauge the honest perspective of our city, and how we as the (Downtown Detroit Partnership) can continue to improve and build on the important work we’ve already been able to accomplish.”

The Downtown Detroit Partnership is a private/public partnership made up of corporate and civic leaders focused on revitalizing the city’s central business district.