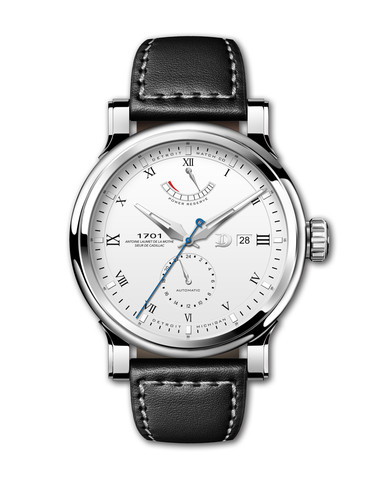 tAlthough Patrick Ayoub has been designing watches for more than a decade, it took time before he and his wife, Amy, felt ready to launch their own company — The Detroit Watch Co.

t“It’s a funny thing: watches need to have a story behind them,” says Patrick, who co-founded Bozeman Watch Co. in Montana, which has a store in downtown Birmingham, and has worked independently with various clients since leaving Bozeman. “Our friends we’re pushing us to create our own brand, but we were struggling to figure out what we would do with that brand. We needed that story behind the watches.”

tThen, while walking around Detroit, an idea came to him. “The history,” he says. “People don’t always realize how deep this city’s history is. Some things have been forgotten, and we want to bring it back. We are a timepiece company after all.”

tAfter several visits to local museums and many hours in the Detroit Public Library, Patrick and Amy registered The Detroit Watch Co., developed a logo based on the Old English ‘D,’ and found stories worthy of the first timepieces that would make up the original collection.

tFeaturing a crown with black and silver fluer-de-lys, the 1701 Edition pays homage to the year the city was founded by Antoine de la Mothe Cadillac. The other watch — The Pride of Detroit Aviator — celebrates Detroit native and millionaire Edward F. Schlee and pilot Billy Brock, who attempted to fly around the world in their Stinson aircraft called Pride of Detroit — the monoplane was inspired by Charles Lindbergh’s solo trip across the Atlantic.

t“Every watchmaker wants an aviator (watch), and I wanted a story specific to Detroit for ours,” Patrick says. “And one day I was visiting The Henry Ford (in Dearborn) while my uncle was visiting from Europe, and I saw the Pride of Detroit (plane) hanging there.”

tLaunch editions of the two watches, priced at $895 and $795, respectively, will be limited to 50 numbered pieces each and will enter production by early July. The firm is securing a small assembly space in Detroit, although Patrick says they will likely need large space as they grow.

tHe adds that he appreciates the support he has received from fellow Detroit-based watchmaker Shinola. “The watch industry is not a competitive industry. Everyone lives well together. If you look at Switzerland and Germany, there are hundreds and hundreds of watch manufacturers, but you never find that competitive ‘Ours is better than yours,’ (attitude) because everyone has a different story and the consumer takes what he wants.

t“It’s (about) personal taste, and there’s a customer for everybody.”