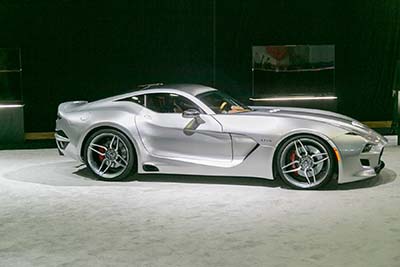 VLF Automotive, a new, Auburn Hills-based luxury sports car company, today unveiled its Force 1 prototype, a two-door sports car with a V10 engine that delivers nearly 750 horsepower. The vehicle, with a base price of $268,500, will begin deliveries in June.

“We made a lot of progress with the cars, delivering the first batch of cars in January,” said Bob Lutz, a partner at VLF Automotive, at the 2016 North American International Auto Show. “We want to be America’s only purvey of bespoke, luxury cars. We will not have exclusive dealers for VLF, and we have volume aspirations of 300 cars per year that will be manufactured in Auburn Hills.”

Lutz, the former vice chairman of General Motors, said the car has a long hood, short front overhangs, a long tail, and pushed out wheels. Lutz said the windscreen wraps around into the side glass and the vehicle has ultra-thin lights in the front and at the rear.

The interior of the car has an integrated Wi-Fi hotspot, a smartphone center console for USB charging, and wine, champagne, and water holders for two bottles.

Lutz said VLF Automotive will be adding jobs at its manufacturing facility in Auburn Hills when production of the Destino and Force 1 ramps up this year.