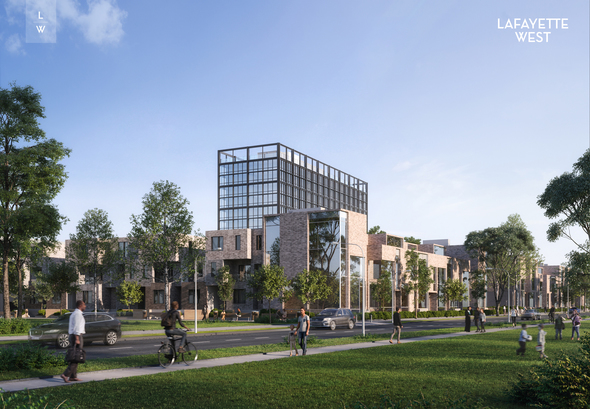 Ginosko Development Co. in Novi today announced Lafayette West, a $108-million residential development project slated to bring 374 new residential units to the Lafayette Park neighborhood east of downtown Detroit. The units include for-rent and for-sale lofts, townhouses, flats, and high-rise units. At least 20 percent will be set aside as affordable.

The project is slated to cover 5.2 acres at 630 W. Ferry Ave., which is between I-375 and Rivard Street. This is where the vacant Shapero Hall is currently located. The hall will be demolished.

The development is expected to offer a mix of new structures on the site, including a 12-story high-rise with 114 luxury rental units and attached parking, 200 lofts for rent, also with enclosed parking, and 60 for-sale townhouses, carriage houses, and stacked flats with attached garages. It will also feature green space.

Every unit will be within walking or biking distance to downtown, major employment and recreational areas, and neighborhood shopping. The project will also include a rooftop terrace and a fitness center.

Ginosko expects to break ground in early 2019. The project is expected to be complete by the end of 2020.

“As Detroit’s recovery continues, we want to make sure big developments like Lafayette West benefit not just new residents, but also the people of Detroit who have stayed through the good times and the bad,” says Arthur Jemison, Detroit’s chief services and infrastructure officer. “From hiring Detroiters for construction and funding workforce training programs, to providing affordable housing, to convening neighbors, to negotiate benefits for the community, we are working to ensure Detroit’s recovery works for everybody.”

The development will be subject to the city’s Community Benefits Ordinance (CBO), which requires a community engagement process for the development to move forward. The project is also subject to Executive Order 2016-1, which requires that 51 percent of the hours worked on the construction be performed by verified Detroit residents, or that the developer contributes to the city’s Workforce Training Fund to build the pool of skilled trade workers who live in the city.

“If I were living in the impacted area of Lafayette West, I would want to know what’s going on in my neighborhood and how I can participate. That is the exact intent of the CBO process and Executive Order 2016-1, which Ginosko Development Co. respects and welcomes,” says Amin Irving, president and CEO of Ginosko. “We’ve been quietly on the rise for many years, and I have grown to love this city and the people who make it amazing. I’m grateful for this opportunity to contribute to the momentum and progress currently unfolding.”

A neighborhood advisory council will later be established to negotiate benefits with the developer. The developer will host six meetings throughout the summer. The first is scheduled for Tuesday, July 3. Residents in the impact area received the first meeting notice in the mail last month.

Due to the shortage of skilled trade workers in Detroit, Executive Order 2016-1 allows for a contribution to the training fund that goes directly to programs that train the next generation of Detroit resident construction workers.