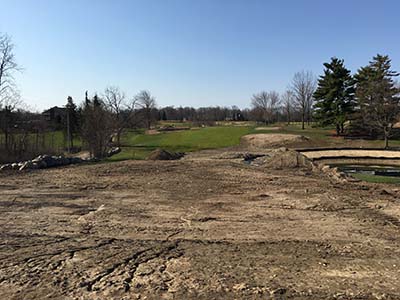 Meadowbrook Country Club in Northville Township will be closed for play this year as the course undergoes renovations including the rebuilding of greens, tees, bunkers, and a few holes. The golf course is expected to re-open next spring.

The club selected Andy Staples of Arizona-based Staples Golf Design to direct the makeover of the 100-year-old course, which also will include the addition of new tees.

“Andy Staples’ keen sense of vision and passion for golf architecture is allowing for something special to take shape here at Meadowbrook,” says Joseph Marini, general manager of the golf club.

Founded in 1916, the course was originally designed by Scottish architect Willie Park Jr. as a six-hole course. Over time, more holes were added to the popular course, which is named after a brook that ran through the former 125-acre farm of Fred C. Cochran. Over time — the course, which hosted the 1955 PGA Championship — was redesigned by golf architect Donald Ross. Prominent professional players that have taken in a round include Sam Snead, Ben Hogan, and Byron Nelson.

Staples says a few holes will be re-routed to improve the course’s playability for all skill levels. He says the course will also have better drainage, resulting in more water conservation.

“Our plan for the golf course reflects the DNA of what makes Meadowbrook so special,” Staples says. “Not only does it take into account the needs of today’s members, but it positions the club to be truly sustainable for the future.”