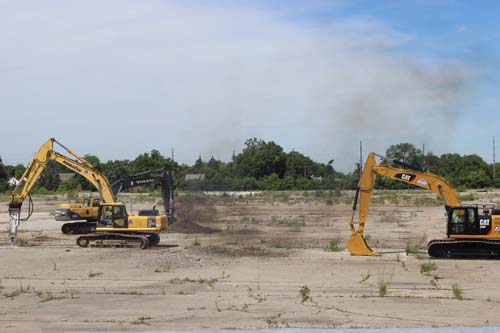 M-1 Concourse, a mixed-use development in Pontiac that includes private garages and a 1.5-mile test track for car enthusiasts, broke ground Wednesday on the first phase of construction, which is scheduled to be completed next spring.

“We’re going to clean up the whole site, remove concrete, put the infrastructure in, build the first 80 to 100 garages, and build the first mile and a half of track,” says Brad Oleshansky, CEO and founder of the auto-themed development.

Oleshansky says the development at the northwest corner of Woodward Avenue and South Boulevard, the site of a former General Motors factory, has sold 80 garages to businesses and car buffs for a combined $14.5 million. Trackside private garages start at $125,000.

“It’s safe, it’s convenient, it’s accessible, and it’s communal,” says Ronald Hausmann, a classic car specialist from Bloomfield Hills who has purchased one of the garages to house his six vehicles that were produced by Wisconsin-based Kissel Motor Car Co., which operated from 1906 to 1931. “It’s so hard for someone in the northern suburbs to find those qualities.”

When complete, the M-1 Concourse will also feature a motorsports club, restaurants, retailers, and year round events.

“Being in this environment is right up our alley,” says Jeff Gammons, director of technical services center operations for Federal-Mogul Motorparts, a Southfield-based automotive supplier that has purchased a 1,200 square foot facility at M-1 Concourse. The supplier will use its space for customer events, training, offsite meetings, hosting Woodward Dream Cruise events, and ride and drive testing in a closed environment.

After the first phase opens to the public in May 2016, construction on the second phase, which entails building the commercial and retail portions of the motorsports campus, along with 57 more garages, will immediately follow.

“This new complex will bring expanded business opportunities and economic activity to Pontiac while creating a place where residents and visitors alike can enjoy a different aspect of our state’s historic connection to the automotive industry,” says Michigan Gov. Rick Snyder.