“Currently, we’re at seven universities (in the Midwest),” Gardner says. “This fall, we’re planning a larger expansion to about 20 or 25 new schools, so that’s where a lot of those resources will be directed.”

Founded by three University of Michigan graduates, Cribspot.com offers college students an online platform to find quickly access off-campus housing opportunities. The website has had more than 40,000 unique views since launching in September and has helped about 12,000 users locate housing through the site, Gardner says.

The Cribspot team — who live in Ann Arbor and work out of the Bizdom accelerator in downtown Detroit — will soon launch an added feature to the website: the ability to pay rent. Currently in beta-mode, the rent-pay service allows students to coordinate rent with roommates and/or parents, providing the ability to coordinate online payments.

“We’re taking the outdated version — of physically walking around to look for rental housing and writing checks for your property manager — and putting it all on an online platform,” says Gardner, who adds the team plans to add team members and move into its own brick-and-mortar location this year. “So much of student life is already online — this is something that has been lagging behind, and we’re trying to bring it up to date.”

While the website is currently focused on college students, Gardner says the startup plans to grow with its users. “We feel like we know the college market best, so that’s where we’re starting. But we’re looking to follow the students who engage with us early. We’ll try to follow them as they grow in their careers and move into new cities. We hope to bring Cripspot to many more cities and towns in the years to come.”

Cribspot was one of 50 startups to apply for the TechWeek Detroit Launch competition, which brought five startups to pitch their ideas to a panel of venture capitalists and industry professionals during the tech conference held last month at the former Federal Reserve Building in Detroit, along with other locations.

“There was a ton of energy (at the competition),” says John Marcicky, community relations and corporate partnerships manager for Rock Ventures and Quicken Loans, who also sat on the event’s executive advisory board. “It gave people a feel as to the latest and greatest in the Detroit tech scene.” 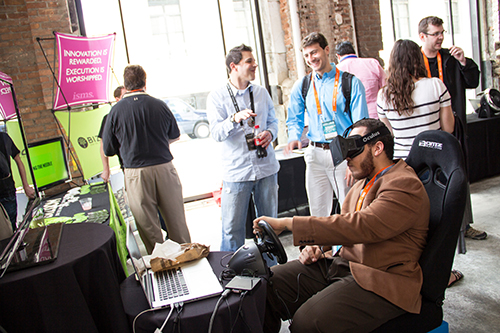 The competition was just one part of the inaugural Detroit conference, which drew more than 2,000 attendees, both young entrepreneurs and established companies. Marcicky expects that number will only increase over time.

“Just to give you some perspective, Chicago is in its fourth year and they have over 12,000 people registered already,” Marcicky says. “Now that the (TechWeek) brand has continued to grow, I think they’re going to see some great numbers.”

As far as the Detroit event goes, Marcicky says organizers will probably commence planning for next year’s conference after TechWeek Chicago wraps in late June. “We’re identifying some larger spaces. With a year-two event, you have to plan for that extra growth which is a great thing.”

At right: TechWeek has signed on for four more years in Detroit, and organizers are eyeing May 2015 for next year’s event, Marcicky says.